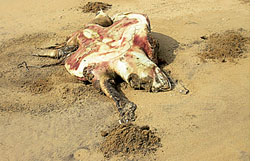 about 3,000 olive ridleys have died in various parts of Orissa since November 2007. The casualty was especially high--1,437--along the Gahirmatha coast in Kendrapada. Activists allege the numbers are a gross underestimation. "There have been more than 10,000 casualties. The situation is alarming," says Biswajit Mohanty, coordinator of Operation Kachchap.

Officials admit to violations. S S Srivastava, chief conservator of forests (wildlife), said illegal fishing caused the deaths. This is in spite of a ban on mechanized fishing within 5 km of the shore throughout the state, fishing not allowed between November and May, and complete ban on fishing throughout the 1,435 sq km Gahirmatha marine sanctuary.

"Demarcating the sanctuary area is a problem. We used buoys but are not in a position to guard them," says Srivastava. The ban has led to much conflict between fisherfolk and officials, he adds.

The fisherfolk say wildlife officials should instead put a tab on big trawlers that use sophisticated nets to fish.

On turtle excluder devices, the use of which is mandatory under the fisheries act, Srivastava says, "We are trying to create awareness about its use. We have even supplied devices to the fishers but they find it cumbersome to use them." Srivastava told Down To Earth that 15 fishing vessels, including trawlers, had been seized since the beginning of the breeding season in November and 84 people were arrested for violating laws.

He also boasts of 40 camps set up by the wildlife department to protect turtles, including patrolling, adding there was a decline in turtles dying over the years (see table: Ridley death count).

Mohanty remains sceptical. "The department has two dilapidated trawlers that cannot chase trespassers. They are nothing but a huge waste of public money," he said.