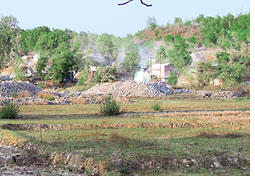 bombay High Court in Goa has asked the state government to initiate immediate action against owners and operators of all illegal basalt quarries in the state and against government officials responsible for allowing these mines to function.

A division bench of the court issued the directive on February 6 following a petition filed by residents of Sao Jose de Areal village in Salcete taluka saying that of the 13 basalt quarries in their village, only three had valid permits from the state mining department and requisite clearances from the state pollution control board.

The villagers alleged that the quarries were using dynamites made of ammonium nitrate that release harmful nitrous oxide for blasting the rocks, without prior authorization but with the blessings of local politicians and law enforcement officials.

The court ordered the state government, state pollution control board and the mines department to locate all illegally operating basalt quarries in the state and take action against such quarry owners and operators within a month from the date of ascertaining the quarry's location. The court criticized the state officials for allowing such unauthorized outfits to run. The board is aware that raw material for stone-crushing units can be procured only from basalt quarries, it noted.