Use of pesticides is responsible for the arsenic crisis 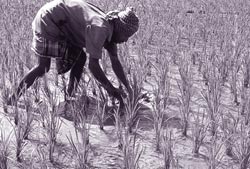 excessive use of pesticides, rodenticides and fertilisers is chiefly responsible for the arsenic crisis in West Bengal and Bangladesh. This controversial theory has been recently proposed by P K Sikdar and S Banerjee of the Kolkata-based Indian Institute of Social Welfare and Business Management, and the Centre for Study of Man and Environment.

Their claim is in stark contrast to the existing theory, according to which arsenic is an intrinsic part of the affected areas' geology. Most experts assert that the groundwater sources got contaminated when wells were dug indiscriminately during 1970s, leading to the leaching out of arsenic from rocks. According to Sikdar and Banerjee, this theory cannot explain how the arsenic leached out from the rocks despite the areas' water being alkaline in nature (for the toxic chemical to leach out, the water should be acidic in nature).

The researchers drilled six sites in four districts of West Bengal. Five sites were located in areas where the concentration of arsenic in groundwater is quite high. Sikdar and Banerjee, however, could not find arsenic-bearing minerals in these places. Therefore, they proposed that arsenic has come from the extensive use of lead arsenate and copper arsenite based rhodenticides and pesticides for jute cultivation. According to them, the arsenic compounds got dissolved in rainwater and then percolated into the aquifers. After reacting with iron, manganese compounds in presence of organic material, they contaminated the groundwater.

Most experts have taken their theory with a pinch of salt. "The authors have ignored some well-known facts about arsenic contamination," asserts Dipankar Chakraborti, director of the School of Environmental Studies, Jadavpur University, Kolkata. "For example, Medinipore district in West Bengal is free from arsenic though jute and rice is cultivated there," he adds. According to him, the researchers should analyse the arsenic content of the rhodenicides and pesticides, and how much quantity of these chemicals are used in the affected areas.