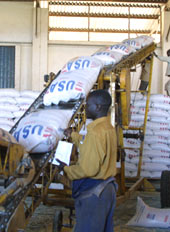 a recent report has blamed the International Monetary Fund (imf) and World Bank for putting pressure on Malawi, a southern African nation, to sell 28,000 metric tonnes (mt) of maize to Kenya, resulting in widespread famine in the country. The report has been released by uk-based Jubilee Research Foundation, which deals with issues related to international debt and finance.

The document alleges that imf compelled Malawi to carry out the transaction in April-May 2001, just before a harvest failure. Ever since, the country has been reeling under a famine, caused by a strategic maize deficit, as maize is the staple food in Malawi.

The report says that Malawi was instructed to sell maize in order to earn foreign exchange and service its debt of us $13 million owed to the imf. However, fund representative in Malawi Girma Begashaw denies the accusation. " imf advised the government to reduce the level of grain reserve but not to sell it off," says Begashaw. In fact, the imf is now passing the buck to the World Bank and the eu, two major donors. "The imf cannot be made a scapegoat for everything. The advice to sell maize was given by the World Bank and the European Union, and it is erroneous to blame the imf," Horst Koehler, imf managing director is reported to have said.