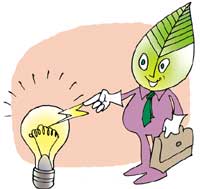 scientists are trying to mimic a leaf cell using synthetic molecules -- an approach that can help solve the impending energy crisis.

Plants are able to convert light into chemical energy with the help of chlorophyll, which belongs to a class of compounds called porphyrins. A team of scientists from the University of Sydney in Australia and Japan's Osaka University, led by Max Crossley, has been able to synthesise porphyrin molecules and is now trying to assemble several of these to produce the equivalent of a leaf cell.

"More than 100 prophyrin molecules can be assembled around a tree-like core called a dendrimer to mimic the wheel-shaped arrangement in natural photosynthetic systems. We are now trying to combine them to produce the equivalent of a leaf cell," says team member Deanna D'Alessandro.The efficiency of certain derivatives of synthetic porphyrin to convert sunlight to usable form of energy shows encouraging results, says the latest study by the team published in the journal Physical Chemistry Chemical Physics (Vol 8, No 17, May 7, 2006).

Leaves can harvest up to 40 per cent of the light falling on them, while the best solar cells available have an efficiency of 15-20 per cent and are expensive to make. "Since they (porphyrins) are so efficient at storing energy, we think they could also be used as batteries," says Deanna. The scientists plan to convert their technology to commercial scale over the next five years.