New vaccines against TB of little help in developing countries 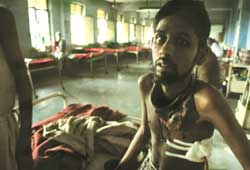 uk study raises doubts about the new generation vaccines being developed against tuberculosis (tb), a major killer in the developing world. Most of the research on tb vaccines is being done in Europe and the us where the immune response of the people is different from those living in the developing world. But this fact has not been factored in while developing the new vaccines, according to the study published in the August issue of Nature Reviews Immunology (Vol 5, No 8).

"The work done in the uk and usa relates to local conditions, and tends to ignore the problems of the developing world. bcg, for instance, protects rather well in the uk. Perhaps there should be much more research effort in India," says Graham Rook of the Centre for Infectious Diseases and International Health, University College Medical School, London.

The disease is caused by a bacterium, Mycobacterium tuberculosis. The standard bcg vaccine works by stimulating production of tH1 immune cells. New vaccines also take the same approach. But studies have shown that in developing countries, exposure to common pathogens such as helminthes (worms) stimulates the immune system to readily produce not only tH1 but also tH2 cells. However, the chemicals tH2 cells produce suppress tH1. The authors suggest vaccines testing models should incorporate such factors to be effective in developing countries. For example, helminth-infected lab animals, primed with environmental mycobacteria, should be used instead of immunologically nave mice.

This new understanding could change the way vaccines are developed. Evidence suggests that to provide protection in developing countries, it is more important to suppress the response of tH2 than to increase an already adequate tH1-cell response. "The candidates currently being tested, at great expense, with funds largely from the Bill and Melinda Gates foundation, are not likely to be any better than the existing vaccine, bcg, which fails to protect from adult forms of the disease in countries close to the equator," points out Rook.