Impatience is the new life 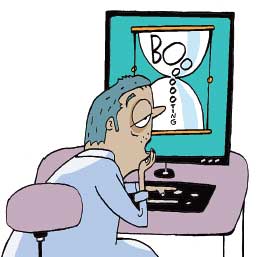 computers that could instantly switch on at the desktop mode without the time-consuming process of booting, may now be possible.

Researchers have induced a property in silicon--the main component of integrated circuits--that can help computers remember their last state even after power is turned off.

Researchers from American Universities of Cornell, Pittsburgh and Pennsylvania and the National Institute of Standard Technology, usa, came together to give the mother board its own memory by introducing a thin film of the compound called strontium titanate onto pure silicon crystals.

The breakthrough came about with researcher Hao Li of Motorola, Inc., who succeeded in depositing strontium titanate directly onto the silicon chip. This is difficult as silicon is highly reactive to oxidation and the crystal spacing of the two materials does not normally match.

Using sophisticated techniques, Li developed a method of depositing the strontium titanate, gradually building up layers that were only a few molecules thick. The result, X-ray data showed, was that the silicon atoms literally squeezed the cubic strontium-titanate crystal to make it fit in, distorting it into an oblong shape. That distortion creates a structural instability in the film that makes the compound ferroelectric.

"This new material gives silicon a kind of an electrical property--the ferroelectric property--which will help it store data in the chips itself. When the computer is switched on, the data will directly reach the desktop without the step of rebooting," said Jaijit Bhattacharya, Sun Microsystems India. This would save time and electricity, he added.

Although such chips will be very expensive, the team hopes the application will outweigh its costs.