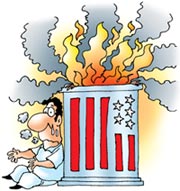 Kerala's port city of Kochi received an unusual consignment from the us. Classified as "office-grade paper" meant to be recycled into newsprint, the cargo turned out to be New York city's municipal waste.

The garbage was detected by Hindustan Newsprint Limited (hnl) at its premises when the first lot of containers was opened. hnl then rejected the remaining lot at the port itself. Officials confirmed they had received 40 containers (carrying about 1,000 tonnes of cargo) from two shipping lines. Of these, 16 containers brought in by the Green Ways Shipping Company were found to contain mostly garbage. The shipping company subsequently burned the cargo at an isolated area under the supervision of the state pollution control board. The matter is being probed. Several parties, including customs authorities in New York and the Kochi-based official of the shipping company, are under suspicion.