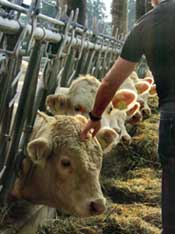 The French farm ministry recently found abnormally high levels of cadmium in animal feed. The ministry said the cadmium, which causes serious liver and kidney damage, has been sourced to a 120-tonne batch of imports of the feed ingredient zinc sulphate from China. A company based in France's Brittany province had imported the suspected compound in September 2004 from a single supplier.

In France, the feed ingredient has been traced to 10 companies, and any supplies still on their premises have been confiscated. Officials said steps were being taken to deal with the problem.