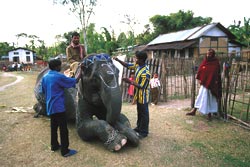 it was a festival with a difference - the spotlight was on elephants. The venue was Kaziranga National Park (knp), Assam. Besides being a huge hit with tourists, the three-day festival from January 11 to 13, 2003, also augured well for the turmoil-ridden human-elephant relationship in the state.

The Assam government announced some significant decisions on the occasion. State minister for environment and forests Pradyut Bordoloi declared plans to notify four elephant reserves in the state by March 31, 2003. The minister is also likely to raise the compensation for death caused by elephants toRs 1 lakh from the meagre Rs 20,000 that the state pays at present.

The festival was the venue for a meeting of senior forest officials of the northeast states and the director of Project Elephant and inspector general of forests, S S Bist.The acknowledgment of the contribution of Assam-based elephant expert Parbati Barua (though much belated), too, signalled a change of attitude in the ministry. Barua was made the first honourary chief wildlife warden of the state. However, some observers present at the festival opined that the predicted winds of change were yet to sweep through the ministry.

In other activities, an initiative to implant identity chips into domestica-ted elephants of the state proved to be a success. More than 100 pachyderms underwent the exercise on the first day of the festival itself. The endeavour was supported by Delhi-based non-governmental organisation Wildlife Trust of India. "These chips can help us monitor the cross-boundary movement of elephants," said Bijoy Dutta, assistant professor in the surgery department of Guwahati University.

The event highlighted the plight of phandis (elephant catchers) and elephant owners today. "After the 1996 ban on timber felling in the region, many elephant owners now take the animals to neighbouring states such as Bhutan and Nepal for illegal felling," revealed a Naugaun-based mahaut (elephant trainer). "No elephant owner or mahaut wants to be part of the illegal felling, but what can they do when the activity on which they depend for subsistence is turned into an illegitimate one?" said Barua.

People-elephant relations are hardly cordial, but the festival could just be the beginning of the much-needed impetus from the state government to improve the present situation.