In a better mould 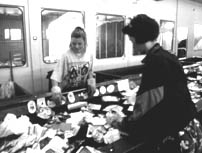 germany's steel industry has come up with a unique solution to the problem of waste plastics -- grind them into particles and use them in the steelmaking process. Plastics make ideal agents for removing oxygen from iron ore in blast furnaces and save on oil and coal as well. It takes 100 kg of heavy oil to produce one tonne of pig iron (pure iron which is used to make steel). The aim of replacing heavy oil and coal with plastics in blast furnaces is to use their ability as reducing agents. They can be as effective as oil or coal.

At temperatures of more than 2,000 c , plastics primarily break into carbon monoxide and hydrogen. These combine with the oxygen in iron ore to form carbon dioxide and steam as well as the pig iron which collects at the bottom of the furnace. In the application of the process, the steelmaking industry is aided by Duales System Deutschland ( dsd ), a government-backed and industry-funded system for recycling consumer plastic packaging. dsd claims that the overall efficiency rate of using plastics in the blast furnace as a reducing agent and as an additional energy source is around 80 per cent.

On the other hand, incinerating plastics to produce electricity has an overall efficiency rate of only 40 per cent. But there have been fears that if plastics containing chlorine, such as poly-vinyl-chloride , are used inside the furnace, they could give off poisonous vapours like dioxins and fluorans. However, independent studies have revealed that con centration of these agents was well within legal limits although a limit of no more than two per cent chlorine content by mass has been established.

Stahlwerke Bremen, which pioneered the use of waste plastics in the blast furnace, has replaced 30 per cent of the heavy oil it uses with a corresponding amount of plastic agglomerates (plastic that has been cut up and granulated by frictional heat into pieces not bigger than a grain of rice). As part of a three year contract with the dsd, Bremen receives us $296 per tonne of plastics it uses. With the money it gets for the 70,000 tonnes of plastics it uses every year and the amount it saves on oil, the payback period will be less than one year. The company is modifying the injection system of the blast furnace so that instead of spraying oil into the furnace, it can combine oil and pieces of plastic.

Following the success of Bremen and the attractive subsidies from dsd , the technique is finding wider use in Germany. This year, another steel company, Krupp Hoesch Stahl was due to begin using the technique and others are lining up. German steel industry will soon have the capacity to recover all waste plastics that are collected through dsd and the use of these plastics in the blast furnace process will play a key part. Planned regulations on waste from cars and electronics will mean more potential supplies for the steel industry.

The German experience has attracted plastics industries from Austria, Sweden, Japan and the uk, which is looking at it as an answer to its growing problem of automotive plastics waste. Once all metal pieces are removed from old cars and the remainder is shredded, the resulting 'autofluff' is a mixture of plastics, foam, rubber and glass. The Care Consortium, a British car industry group, is looking at ways to meet European recycling targets with the help of recycling plants. Care Consortium managers say that it may be possible to separate plastics from the rest of the shredded material. If British Steel, which already recycles automotive steel, were to take back plastics as well, transport costs in the uk could conceivably be reduced.