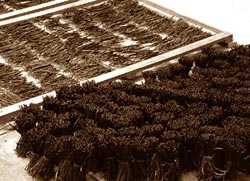 vanilla growers in India's southern states are in deep trouble. They don't know what to do with the current season's crop because the buyers have disappeared from the market. The high price of vanilla in the international market had tempted these farmers to take up the cash crop's cultivation in a big way in the past few years. The global price of processed vanilla beans rose from us $19 in 1998 to us $350-400 in 2003 (see 'Cash and the beanstalk', Down To Earth, February 15, 2004,). The price of green vanilla bean in India in 2003 was Rs 3,750 per kilogramme (kg). This has crashed to less than Rs 300 per kg this year.

"We haven't bought any quantity so far," say George Abraham of avt Mccormick Ingredients Limited and Abraham Mathew of Synthite Industrial Chemcials, two major buyers for Kerala's vanilla. Madagascar, the largest producer of Vanilla, has also not resumed exports after last year, when its crop was hit by cyclones. "According to reports, prices of cured beans procured from farmers are now as low as the equivalent of us $20 per kg," says C J Jose, chairman, Spices Board. Contrary to media reports that cyclone had again damaged the crop in Madagascar, reports this year indicate that the global demand for natural vanilla has dropped from the average 2,000 tonnes to around 1,000 tonnes due to the flavour industry reacting to its high price. Others interpret the crisis differently."It's all due to the Americans," says a farm manager in Wayanad, Kerala, hiting at the operations of some international cartel.

The price crash has also affected Papua New Guinea, Uganda, and Indonesia, says Barry Ramoi of Ramoi Vanilla Limited, a vanilla exporter in Papua New Guinea. "Start processing the vanilla yourself and sell the flavour or fragrance in India without waiting for overseas buyers," he advises producers. The All Kerala Vanilla Growers Association, a farmers' group, says the state's farmers are selling 10 gramme pouches of cured beans for Rs 100-Rs 300 and propagating that adding vanilla to a cup of tea would add only Rs 1.50 to its price. They are also 'selling' the crop to farmers' organisations at an advance price of around Rs 250 per kg and an offer of bonus in the future, if plans for direct exports materialise. But that's a big if.