In a sorry state 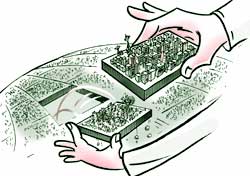 each new report on the state of India's forest cover published by the Forest Survey of India (fsi) provides new insights and triggers fresh criticism. The latest State of Forest Report (sfr) 2003, the ninth in a series, released on July 19, 2005, by Union ministry of environment and forests (moef), fits the bill. It has made experts feel the fsi's approach is too traditional, both in terms of research methodology and the agency's centralised, bureaucratic functioning.

Since the last report of 2001 to 2003, the country's forest cover increased by about 2,800 square kilometres (sq km), the report says. But this 0.41 per cent increase conceals an alarming figure: the net drop in the dense forest cover was 26,245 sq km. This means considerable expanses of dense forest areas (over 40 per cent tree cover) degraded to the 'open forest' category (10-40 per cent tree cover). The total addition in open forest area, from different categories, was 29,000 sq km. The "change matrix" of types of forests reveals a bleak scenario: actually about 55,600 sq km dense forests have degraded into open forests, 420 sq km into scrub land and 27,821 sq km into non-forest areas. But other open, scrub and non-forest areas have added to dense forests, making the net change low. Save a few states like Orissa and those of the north-east, all others recorded a loss in dense forests. The bulk of this, over 18,000 sq km, was in Karnataka, Kerala, Madhya Pradesh, Maharastra and Uttar Pradesh. The change matrix also raises another question: how can 46,177 sq km of open forests improve and become 'dense' in just two years (see graphic : Numbers hide real loss)? fsi merely says its mandate is to present data, not explain it.

The report further blurs the change matrix by saying that of the 26,245 sq km of dense forest decrease, only 4,605 sq km is real decrease. The rest is due to 'interpretational corrections': areas considered dense forests earlier were found to be sugarcane or cotton fields. The error occurred because they "give reflectance similar to that of forest cover". But G Areendram, an expert of geographic information systems (gis) and wildlife at World Wildlife Fund, the global conservation group, says, "it is difficult to confuse the two, since the reflectance value is different and the pattern they yield is easily distinguishable". Also, the logic that sugarcane does not grow in hilly areas or other regions associated with dense forests seems to have escaped fsi.

There is a growing lack of confidence in fsi ability to interpret data, coupled with advances made in the field of remote sensing and its increased use in India. The report doesn't identify land ownership while describing changes in forest cover, making it difficult to fix responsibility. fsi claims this is because these facts are not clear. But S P S Kushwaha of Indian Institute of Remote Sensing, Dehradun, rubbishes the claim: "In fact, over 70 per cent of this [information] is available and can easily be shown." Also, despite the fact that technology permits distinguishing between natural forests and plantations, fsi doesn't do so. Kerala is shown with 40 per cent forest cover; that most of these are plantations is not registered.

P S Roy, deputy director, National Remote Sensing Agency (nrsa), Hyderabad, suggests: "There is no need for a full mapping every two years...a very good baseline map on which changes can be superimposed regularly will be more scientific and also reduce error and the time and money utilised." fsi disagrees: "We do a full wall-to-wall mapping. Why should we do any less?" asks Aloke Saxena, joint director, fsi. He says using high-resolution mapping will require more time and money. Currently, fsi interprets raw data bought from nrsa for about Rs 60 lakh.


M D Madhusudhan of Natural Conservation Foundation, Mysore, feels, "it [the report] is a crucial source of large-scale data, but has become fsi's monopolistic pursuit". Eminent gis and remote sensing expert Jagdish Krishnaswamy agrees: "At present there is none of the accountability or transparency that comes with peer reviews. The process should be decentralised; fsi should work with other groups or...hand the task over to experts in different regions." The sense is that the crucial task shouldn't be handled by a single body, especially one under the government's pressure to assure the nation that its forests are safe. It is also feared that weak forest management will strengthen the case to involve the private sector in achieving the goal of 33 per cent forest cover; moef is already talking about leasing degraded forestland to wood-based industries.