In a tangle over nets 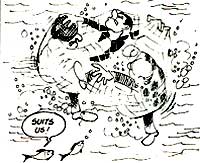 The Bay of Biscay was turned into a battleground as Spanish fishermen snipped the nets of 3 Cornish boats in the first week of August, claiming that they exceeded the European Community length limits of 2.5 km. Skirmishes also took place between French and Spanish fishermen.

Meanwhile, Rainbow Warrior, the flagship of the environmental group Greenpeace, was sprayed with a high-powered water cannon by a French vessel when activists set out to examine the nets of a French trawler fishing for tuna. Greenpeace has demanded that an investigation be launched into the incident.