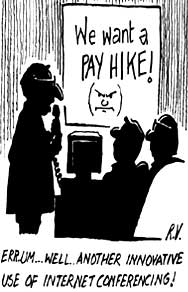 the days of boardrooms darkened for projecting documents via an overhead projector during meetings are now on their way out. No more hamhanded presenters fumbling with transparencies while the audience expectantly waits in gloom. Polycom Inc of San Jose, California, have come up with ShowStation unit, a unique device that will enable groups in several locations, linked by telephones, to see and edit documents in normal light. The unit combines a high-resolution camera with data compression and advanced communications technology.

Most business organisations, despite their growing dependence on audio-visual media as an economic alternative to face-to-face conferences, are still forced to exchange reams of documents to actually get things done. ShowStation takes board meetings further out of the paper realm. The units, which cost about us $18,000, are designed to transmit a clear image of any object in a few seconds to a desk-top computer elsewhere for wall-screen display.

The parties concerned can speak freely to one another over the conference telephone system and, using an electronic pen, can also make changes in the image that instantly appears at the other end of the line. The images are also saved in the machine's memory for further reference. The ShowStation incorporates the T 120 standard for teleconferencing that has been approved by many hardware and software industries. The key to T 120 lies in its ability to link users regardless of their hardware platform or operating systems.

Since various users with the necessary software will be able to tap into conferences held between two ShowStations, the scope for widespread interactive meetings, presentations and lectures is wide. According to analysts, the system is a pioneering effort in furthering people's ability to communicate and share applications on the Internet or on in-house corporate networks or telephone lines. Microsoft Corporation, for example, has included the new system in NetMeeting, its recently announced software for Internet conferencing. According to Jeff Hurmuses, Polycom's Asia-Pacific director, 'We believe we are offering something that people who now use video or audio conferencing really need.'