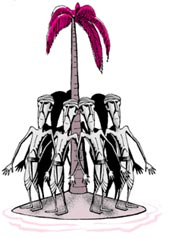 on november 19, the Karnataka government tried its hand at damage control as it declared a Rs 60-crore rehabilitation package for approximately 5000 tribal families living within the proposed Kudremukh National Park. The announcement came a day after the killing of two women members of activist group Kanti Kari Mahila Sangha (dubbed as naxals by the authorities) in a police encounter at Bollottu village in Udupi district. But the government's gesture has backfired, with local federations opposing it tooth and nail. Its overall mismanagement of the situation has also allowed left-wing extremist outfits like the Communist Party of India (Marxist-Leninist) to establish a firm foothold in the region.

The notified national park is spread over two districts of Karnataka -- Dakshin Kannada and Chikmaglur. Bodies such as the Kudremukh Rastriya Udayana Virodhi Vakoota (kruvv) and a number of local groups had so far been campaigning against iron ore mining in the region. However, they are now stoutly resisting the formation of the park since it will lead to the large-scale relocation of people.

In 1987, the Karnataka forest department issued a preliminary notification declaring 62,000 hectares (ha) as the temporary area of the national park. It covered two state forests and two reserve forests across 38 villages, five taluks and three zilas . In 2001, the state government issued the final notification. While 57,628 ha was declared as the national park, 3703 ha of forestland was denotified for the purpose of mining.

The final notification also stated that revenue villages, revenue lands and tracts owned by individuals would be excluded from the park. According to K S Sugara, conservator of forests, Mangalore: "Only encroachers will be evicted. Notices have been issued in this regard." But kruvv president Kalkuli Vittal Hegde points out: "Most of the tribals do not have documents to prove land ownership. They will, therefore, be considered encroachers."

Lately, hostility has marked the people's movement in the Malnad area. It is believed that they harbour a grouse against the government because rather than trying to address their genuine concerns, it has unveiled a rehabilitation programme. There are apprehensions about the package, too. For, not only does it aim to set up resettlement camps outside the park, it envisages training the reserve police to curb violence in Malnad as well.

Leo F Saldanha, coordinator, Environmental Support Group, observes: "Disenchantment is high among forest dwellers. They first fought against the mining company and now they are being ousted from the habitation which is rightfully theirs." Besides this, several false promises were made to the people. "This resulted in some young members of the federation forming armed groups," explains Hegde.