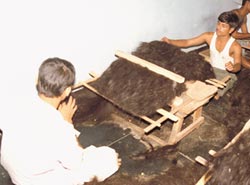 clumps of half-burnt and rotting hair -- a toxic hazard -- are a common sight at Bhagyanagar village in Koppal district of northern Karnataka. At the root of the problem is the hair-processing industry sited in the area. Now, in the wake of the rising incidence of tuberculosis, bronchitis and other ailments in the locality, the authorities have set a three-month deadline for the hair traders to shift shop.

Ironically, those most susceptible to the pollution -- local inhabitants -- also play a role in causing it. More than 3,000 households of Koppal, predominantly from Bhagyanagar village, are engaged in the hair-processing business.

What started as a small trade in the early 1980s has today expanded into a multi-crore business. But with business booming, the quantity of hair strewn in Koppal has also increased. This regardless of the risks associated with such dumping. "When burnt, the particles enter the respiratory tract and cause severe allergies," points out S R Konded, district health officer, Koppal. T Lingaraj, taluk health officer of Bhagyanagar, reveals that more than 75 tuberculosis cases are reported annually at the village primary health centre because of the pollution caused by the hair processing industry. "Hair decomposes in hundreds of years. When burnt, it can release toxic elements," warns environmentalist Iqbal Malik.

The waste from the industries was being dumped on the banks of Hirehalla river, which joins Tungabhadra dam, the main drinking water source of northern Karnataka. Three months ago a concerned Koppal health department wrote to N Nagambika Devi, the deputy commissioner of the district.

When the industry ignored warnings about proper disposal, the authorities halted its operations for more than a month. The ban was lifted in May 2003. Though the households stopped dumping waste in the village, they started burning it in the adjacent wastelands.

Consequently, the deputy commissioner issued the 90-day ultimatum. "We have suggested that they relocate the industries 10 kilometres (km) away from the village and dig deep pits to dispose of waste," states Devi.

The bald truth, however, is that industry owners are not happy with the order. "If we have to shift this labour-intensive industry, why not shift the entire village?" asks K S Gupta of Srinivasa Enterprises, Koppal, a major player in the hair trade.