In honour of Galileo

As night fell on April 14, the lawns of the American Academy in Rome twinkled with candles.

They represented an exact replica of the stars that would have been visible on the same day in 1611 when Galileo Galilei first demonstrated his telescope to scholars on a Roman hilltop. 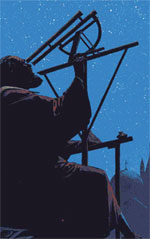 Four hundred years later, the astronomer condemned by the Catholic Church was celebrated on the same spot—where the American Academy now stands—with a multimedia art exhibit.

Heliographs, astrolabes and other antique astrological instruments that belong to the Vatican Observatory stood alongside contemporary art inspired by Galileo and his science: rows of hot, bright floodlights simulating the sun; a performance by a Tibetan musician playing a telescope-like horn. Nearby, a video installation juxtaposed monologues of Galileo’s works with those of church officials.