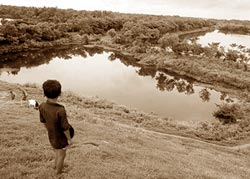 environmentalists are incensed about the proposed West Bengal Protection of Water Bodies Bill, 2004, which, they allege, could leave the state high and dry. Once enacted, the bill would legalise filling up of waterbodies less than 4 hectares (ha) in size. It would also allow filling up of larger waterbodies or extraction of water from them, simply by obtaining an approval from a "competent authority".

The bill is to be discussed in the ensuing monsoon session of the state assembly. Section 2 (i) of the proposed legislation defines a wetland as a waterbody measuring 4 ha or more. "This means that a smaller waterbody could be filled up on the pretext that it was only a pond and not a wetland," feels Mukuta Mukherjee, secretary, Friends of Wetlands and Wildlife, a Kolkata-based non-governmental organisation.

Further, section 7 (1) of the bill says that waterbodies bigger than 4 ha cannot be filled up or water cannot be drawn from them without the prior permission of a "competent authority" or a "local body". Section 7 (2) provides for a public hearing before such an act. But Mukherjee says that there can be wanton destruction even after a public hearing, and adds: "After all, who can dare the promoters in a so-called public hearing?"

Greens are also enraged over Section 15 of the bill. According to it: "No court shall take cognisance of any offence punishable under this Act, except on a complaint made by the competent authority, or a police officer not below the rank of a sub-inspector." Justice Bhagabati Prasad Banerjee, a former judge of the Calcutta High Court's green bench, laments: "The proposed law does not even allow an individual the right to judicial scrutiny. The bill is clearly aimed at helping promoters to grab more land at the cost of waterbodies, and goes against the very law of preservation of wetlands mandated by the Ramsar Convention."

Shakti R Banerjee, state director of World Wide Fund For Nature, explains that no measurement of wetlands has been specified under the 1971 Ramsar Convention -- an international treaty for the conservation and judicious use of wetlands and their resources.