In love with the land

By shielding Utah lands from developmet, US President Clinton delighted environmentalists but infuriated most Utah officials who see coal mining as important to their livelihood 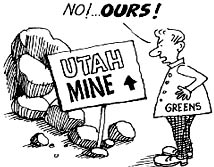 In another appeal for the 'green vote', administration officials announced a major policy shift in the vast Conservation Reserve Programme ( crp ) to better protect environmentally sensitive farmland in the Great Plains and elsewhere. The programme pays farmers to take land out of production.

Clinton, on a campaign swing through the West, used presidential powers to snap shut a long-standing dispute over the future of sandstone canyon lands that also hold large coal reserves.

Because Utah happens to be the most Republican of all the states, Clinton played to the rest of the West, traveling to Arizona to sign the presidential proclamation at the rim of the Grand Canyon. "Our parents and grandparents saved the Grand Canyon for us," Clinton said. "Today, we will save the Grand Escalante canyons and the Kaiparowits plateaus of Utah for our children."

In the crowd were several officials of Kane County, Utah, where the new national monument will be created, wearing black ribbons on their lapels. The proclamation also drew sharp criticism from Senator Orrin Hatch. The Utah Republican said the monument designation "has nothing to do with preserving land in southern Utah" and "everything to do with scoring political points with a powerful interest group, just 48 days before a national election."

The declaration does not settle the mining dispute. Andalax Resources Inc., a Dutch mining company, holds mineral rights to part of the area and has been preparing to start a big coal-mining operation there.

In Washington, the administration announced a major policy change for the vast crp which is expected to cost us $12 billion over the next seven years. The crp was created a decade ago ostensibly to curtail soil erosion, but its real purpose was to break the cycle of overplanting, farm surpluses and low prices by paying farmers to take cropland out of production. Starting early next year, the agriculture department intends to turn it into an environmental-protection program.

Currently, the agriculture department is paying farmers us $ 81.7 billion a year in rents for 13,365,000 ha enrolled in the conservation reserve. Under the 1996 farm law, thousands of farmers now have the option of resuming production -- before their 10-year crp contracts expires -- on land that doesn't erode easily.

Some major grain companies have lobbied for keeping the crp as small as possible so as to maximise us farm production and exports. But the Clinton administration insists on keeping a balance between conservation and production.