Media coverage of the just-concluded World Social Forum was vast. About 200 media organisations landed up to report wsf or beam it to all ends of the globe... 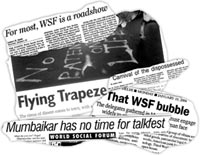 Media coverage of the just-concluded World Social Forum (wsf) was vast. About 200 media organisations landed up to report wsf or beam it to all ends of the globe.

The mainstream Indian media has preferred to take a largely skeptical stance, often bordering on the indifferent. In curtain-raising articles, readers were told that the 'extreme left' -- used negatively -- were about to descend on India for a huge 'party'. Narrowly interpreting 'globalisation' as primarily an economic phenomenon, editorials used to upholding the 'feel-good' factor were naturally pre-disposed to treat the event as 'utopian' (read: 'stupid'). Readers were warned that wsf didn't treat of the 'real' world (of 'practical matters'); that it was a 'Western' concept and that globalisation shouldn't be resisted -- one op-ed article opined that since wsf was a conglomeration of "aid-guzzling ngos", nothing it said mattered.

But for those in medias rex -- in the middle of things -- wsf managed to satisfy a broad spectrum of expectations. Nighat Said Khan, executive director of Lahore, Pakistan-based asr Film Unit, was at Mumbai to make documentaries "on issues for which we don't get footage in Pakistan. This will help people get a wider coverage of what's happening here." Antonia Font Gelabert, a freelancer from Spain was visiting wsf for the first time: "I have understood the potential of such meetings. This event has also helped me build contacts, which is very important for any journo."

Maurizio Musolino of La Rinascita, a weekly magazine in Italy, was "very excited" about the event: "I have attended many social forum meetings. But the Mumbai meeting has given me the best experience because people here are the protagonist. For us Europeans it has been a great experience to see that there are other people and other voices." Felt Pune-based freelancer Rahul Chandawarkar: "I am amazed at the high energy levels of people. All barriers have been broken, including the language barrier. You can see a Dalit speaking with a German." As journalist Roni Marco puts it, "From such forums people can begin to dialogue and make another world possible."