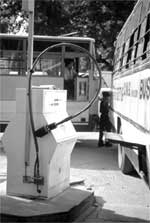 ever since the Mashelkar Committee submitted its interim report on the country's auto fuel policy on January 1, 2002, the authorities have gone into overdrive. While it took the Union ministry of petroleum and natural gas barely four days to accept the recommendations in their entirety, the Union cabinet too lost no time and gave the document the green light on January 8. By contrast, the Supreme Court (sc) directive on the use of cng (compressed natural gas) in Delhi -- based on the suggestions of the Bhure Lal Committee -- has taken years to implement.

Are the powers that be pushing through a dubious document? Environmentalists think so. They feel that by stipulating lenient emission norms, the policy plays into the hands of the polluters. In the process, it steamrolls the sc 's initiative to provide clean air.

The panel, headed by R A Mashelkar, director general of the Council of Scientific and Industrial Research (csir), was set up in September 2001 to outline the country's roadmap for vehicle emission norms. Experts, however, aver that its recommendations are weak and regressive.

Mashelkar says that the interim report has been misinterpreted. He clarifies that cng has not been rejected and questions have only been raised about the conversion of engines and kits in use. The document envisages the implementation of Bharat Stage II (Euro II) emission standards -- currently in force in four metros -- in Bangalore, Hyderabad and Ahmedabad by the end of 2003 and in the entire nation from April 1, 2005, onwards. Euro III equivalent norms for all types of vehicles (barring two and three-wheelers) are to be introduced in Delhi, Mumbai, Chennai, Kolkata, Bangalore, Hyderabad and Ahmedabad from April 1, 2004. These are to be enforced in other parts of the country from 2010.

While the report has been lambasted for its general lack of vision, it has come in for severe criticism on two counts in particular. Firstly, the panel's endorsement of the Delhi government's stand that the consumers should have the right to choose the fuel type and vehicle technology. And secondly, its dilution of the recommendations of two earlier committees (see table: Three committees, different roadmaps). The previous reports were submitted by the Inter-Ministerial Task Force in March 2001 and the Society of Indian Automobile Manufacturers (siam) in 2000. The former, headed by Central Pollution Control Board chairperson Dilip K Biswas, set March 2005 as the deadline for meeting Euro IV standards with the next best option of achieving Euro III norms with 50 parts per million (ppm) sulphur diesel in six cities by 2005. The latter requires the vehicles to meet Euro III norms in 2004 and Euro IV in 2007. In effect, the Mashelkar Committee report's environmental concerns are lower than those of the auto industry, points out an expert.

The haste shown in accepting the recommendations has given rise to apprehensions that the interim report is being treated as final. But Mashelkar insists that the complete document would be ready in March 2002 and would go into greater detail.

An activist says that by limiting the government's role to decide only vehicular emission standards without going into vehicle and fuel specifications, Mashelkar has given Union minister for petroleum and natural gas Ram Naik reason to rejoice. Because the authorities can now slip back into the inaction mode that they have been in since 1991. Delhi transport minister Ajay Maken, too, has cause for cheer as the Euro II norms stipulated till April 2004 are already being adhered to in the capital. But Maken is guarded. He has reportedly said that the Delhi government will soon move the sc, seeking permission to adopt the dual fuel plan. Till then, the phase-out of diesel buses will continue.

Rajeev Dhawan, a senior advocate of the sc, says: "The apex court wanted to zero in on the best fuel available to solve Delhi's air pollution problems. Both the Union government and the sc agreed on cng as it was the least polluting, least expensive and was readily available." He is said to have contested the committee's contention that cng is in short supply. On his part, Mashelkar has revealed that the panel's surmise on cng shortage is based on the information provided by the petroleum ministry. This approach is questionable since data on the ready availability of cng is easily accessible.

"It is perhaps apt that only bus operators, who are also the worst polluters, are happy with the report," says an environmentalist. Sure enough, transport unions have welcomed the document. "This is an expert committee and whatever it is saying is right," gushes H S Kalra gleefully. He is general secretary, Delhi Bus Operators' Forum. "We have been contending for a long time that emissions, not fuel type, should be specified," adds Kalra.

Despite noting at the outset that "public health is a prime concern", the report appears to offer nothing to address the issue. Even in 2005, diesel will have a sulphur content as high as 350 ppm with no cap on polycyclic aromatic hydrocarbons. Petrol will be rich in aromatic content that is highly toxic. And indiscriminate use of unsafe oxygenates will continue. Clearly, it is going to be a return to the era of smoke and fumes.