In search of the axion

The existence of an elusive atomic particle, crucial to the theory of the origin of the universe, may soon be established 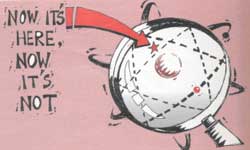 SCIENTISTS in the us and Japan are now on the verge of establishing the existence of an elusive elementary atomic particle called the axion. Till date, the axion has only been theorised and has helped explain a discrepancy between the theory of the origin of the universe and the facts available to scientists. If its presence is established, particle physics is in for an exciting time. But if it proves to be a theoretical necessity not supported by fact, theory will have to change accordingly.

The search for new elementary particles has always been a continuing endeavour for particle physicists. Unfortunately, most of the fundamental building-blocks of nature required by theory are already well known. Among the important exceptions to this are the Higgs boson and the axion.

The Higgs boson is required by ,theory to make it consistent and will most likely be seen in the next generation of accelerators. The axion, because of its weird properties, will never be seen in accelerators and hence ingenious experiments have to be designed to discover it. Two such experiments are currently underway and researchers are waiting for the results to solve the mystery of this elusive particle.

Proposed about two decades ago, the axion is required by the currently accepted theory of strong interactions, quantum chromodynamics (QCD). The theory describes how quarks, the elementary constituents of nucleons, and gluons interact. This should be identical when we run the interaction backwards in time. That is, the interaction should be time-reversal symmetric. This and other requirements of the theory could be met by the introduction of a particle in the model. This hypothetical particle was called the axion by Frank Wilczek.

Restoring the consistency Of QCD is only one of the important things the axion does. It also provides a solution to the missing mass problem. That the amount of visible matter in the universe is much less than the amount of matter inferred by its gravitational force is termed the missing mass problem or the dark matter problem. Many particles and exotic objects have been proposed to solve the mystery of the missing mass. These have ranged from known particles like neutrinos, to innovative objects like wimps (Weakly Interacting Massive Particles) and MACHOS (Massive Compact Halo Objects). If the axion exists, it would be a natural candidate for solving the missing mass problem. Axions are thought to be extremely light, each one of them weighing only a thousand-billionth of an electron. Nevertheless, there could be so many axions in the universe that they could potentially provide a large fraction of the missing mass.

Ever since they were hypothesised, people have attempted to detect axions without success. But two experiments now operational could change that. One of them is based at the Lawrence Livermore Laboratory in the us and is a collaboration between one Russian and six us institutions. The setup is a copper cavity that is cooled to extremely low temperatures (-270'c),and is put in the field of a giant superconducting magnet. When the axion interacts with the magnetic field, it should convert into a photon (electromagnetic waves). If the cavity is tuned to the correct frequency, it can detect the photon and hence the axion. Data has been collected for more than a year and are being analysed.

The other experiment has been set up at the University of Kyoto, Japan, and has just started recording data. The basic technique is similar, though photon detection from axions is done differently in this experiment. Here the photons are detected by being absorbed by Rydberg atoms, in which the electrons are so far away from the nucleus that they are very loosely attached it.

If the mysterious axion is detected in these experiments, it will arouse great interest in the fields of particle physics and cosmology. If not, there will always be newer, improved models of nature to take care of the eventuality. Either way, there promises to be a lot of excitement.