In the tax bracket again

The Orissa government has slapped a forest development tax on three minor forest produce items -- tendu leaf, timber and bamboo. Seen as a countermeasure to the March 2001 Orissa High Court order that declared the imposition of state sales tax on tendu illegal, the decision is likely to hit primary gatherers hard in the long run 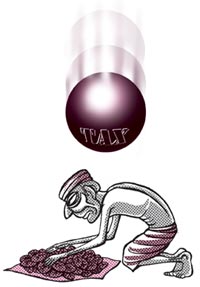 The Orissa government has slapped a forest development tax (fdt) on three minor forest produce (mfp) items -- tendu leaf, timber and bamboo. Seen as a countermeasure to the March 2001 Orissa High Court (hc) order that declared the imposition of state sales tax on tendu illegal, the decision is likely to hit primary gatherers hard in the long run.

The move appears ill-timed. It comes close to the state's July 15, 2003, alarming hunger tracking report. As many as 49,187 persons in 30 districts require food immediately; over a lakh are in dire need of pension and more than 300 primary breadwinners in poor households suffer prolonged illnesses.

The Orissa Forest Development Ordinance, 2003, was promulgated on July 18. It fixes the levy rates for tendu leaf, timber and bamboo at 16 per cent, 4 per cent and 1 per cent, respectively.

Earlier, the state government used to collect a 20 per cent tax and 2 per cent surcharge on tendu leaf sales. In 2000, some traders filed a case in the hc questioning the validity of the levy. They argued that since tendu leaf had been nationalised in 1973 and its trade was categorised as an interstate transaction, the sales tax should be abolished. The hc upheld the traders' contention.

The court verdict translated into an annual revenue loss of Rs 25 crore for the state government, as its share in the central sale tax was only 4 per cent. B K Patnaik, special secretary, Orissa forest and environment department, justifies the new levy: "The state government cannot afford to forego 16 per cent tax on tendu leaf trade when it is facing a financial crunch." Orissa chief secretary Pratip Kumar Mohanty, too, endorses the move. "The funds collected under the head of fdt will be earmarked for the regeneration and maintenance of the state's existing forests," he explains.

Such statements, however, ring hollow considering that development of forests and other natural resources has not been accorded priority by successive regimes in the past. A clear instance of this is the forest department's failure to utilise more than 65 per cent of the funds allocated for the compensatory afforestation programme. In fact, the office of the principal conservator of forests reveals that ever since the scheme was implemented in 1980, 27,055 hectares of forestland has been diverted for non-forest purposes in the state.

It may also be noted that less than half of the forest division's budgetary provision of Rs 105.80 crore for 2003-2004 would actually be spent on developing forests. The reason: salaries will eat up a whopping Rs 77.37 crore. Such spending patterns have spawned a situation, after 2000, wherein expenditure has overshot revenue despite forests being neglected.

Radha Mohan Mallick of the Nabakrushna Choudhury Centre for Development Studies (ncds), a state government-run research organisation, opines: "Financial mismanagement and weak enforcement of programmes are to blame for the forest department being tagged as a loss-making sector now." But Amiya Mohapatra, managing director, Tribal Development Cooperative Corporation of Orissa Limited, a marketing agency managed by the state government, differs. "The trend has changed because timber and bamboo -- two products that contributed substantially to forest revenue -- are hardly being harvested. Besides, profit margins in tendu leaf trade have remained static over the past few years."

Significantly, in 1998, when there was a technology shift in the paper industry, state authorities failed to adjust. The industry was the biggest consumer of bamboo. But after switching over to wood pulp as raw material, it wanted to procure bamboo directly from primary gatherers to cut costs and avoid procedural delays. The Orissa Forest Development Corporation (ofdc), the state-owned procuring agency, however, remained inflexible on the royalty issue. Not only could bamboo not be harvested in many forest divisions, more than 68,000 tonnes now rot in ofdc godowns.

Tapan Padhi of the Regional Centre for Development, a Bhubaneswar-based non-governmental organisation, feels that the decision to impose fdt may actually backfire. "It could spark a price spiral not supported by the market," warns Padhi. Patnaik brushes aside such apprehensions, stressing: "The new tax would only make the traders play safe. In the event, there could be a reduction in tendu prices."

The overcrowded tendu leaf market is already fatigued. Worse, the Orissa government's "harsh" measure could compel traders to shift operations to other states. So, primary collectors -- who rely heavily on the trade for their livelihood -- will bear the brunt of the impending tussle between the state government and purchasers.