In their own voices 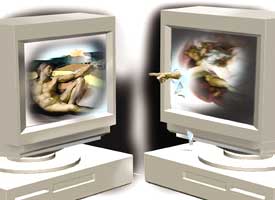 With worldwide users numbering in billions, the integration of information technologies into modern routines can barely be considered a phenomenon anymore. But as these tools are increasingly taken for granted by those with access, the spectre of those without diminishes in the public's conscious -- and, becomes increasingly problematic. India's information technology boom has been much- hyped. But the country was placed 51st out of 53 in a recent ranking of nations in terms of their general public's access to the internet. Moreover, even as programmes such as Mission 2007 try to bring into "every [Indian] village a knowledge centre", one section of the society is repeatedly slipping through the e-cracks: indigenous communities.

Concerns such as these will be the focus of a major un meeting this November in Tunis, Tunisia: the World Summit on Information Society (wsis). The last-minute, sideline formation of the Global Forum of Indigenous Peoples and the Information Society (gfipis) compelled organisers of wsis-i -- held in Geneva Switzerland in 2003 -- to include indigenous concerns in the meet's declaration. In the hope of maintaining that momentum in the run-up to the Tunis meet, the us -based journal Cultural survival quarterly (cs) has produced a special issue: Indigenous peoples, bridging the digital divide.

While the issue devotes its introductory editorial and lead article to setting the wsis i / ii scene with regards to activities of the gfipis, the journal is careful to note that the scope of information technologies is much more than simply internet access. Rather, the adoption and adaptation of new technologies are seen as ways to equalise playing fields and assert identities. "Today's technology provides the means for indigenous peoples to reinforce and assert identities," notes cs executive director, Ellen Lutz, in the editorial. The issue's 12 articles subsequently explore Lutz's concerns through the problems and successes of individual indigenous projects in the new, cheaper techniques of digital radio, film, and website production. Although the articles originate from North, Central and South America, their experiences and conclusions should resonate around the globe. These include ideological discussions and an array of case studies, as well as eminently informative resources on the nuts-and-bolts of indigenous media endeavours -- such as where to look for funding, cooperative structures and potential pitfalls.

There journal makes a crucial distinction between indigenous groups as media subjects and media created by such groups. Canadian radio journalist Guy Buchholtzer notes that indigenous issues remain "almost exclusively confined to the news. But to reach wide audiences, journalists attenuate cultural particularities". This results in horribly blinkered depictions: indigenous people are defined by their problems, and not by their histories and characters. The result is not just misrepresentation, but a startling lack of depth of understanding of indigenous identities.

How can that identity be reasserted? Several contributors to this issue emphasise that can only be done by the indigenous groups themselves. But such sentiments are more easily discussed than acted upon. Despite the Indian media's propensity to parade it numbers, for instance, where are the statistics on the country's indigenous media productions?

Regardless of the medium, such undertakings require money. Of course, the digitalisation of radio, film and internet production has made self-documentation cheaper than ever. But as Jeremy Torrie, a film-maker who belongs to Canada's Ojibway tribe, states in the journal: "It is difficult for a group to create a vision for the future when they are focused on survival". Based on his own experiences, however, Torrie offers this: "There is little that is more substantial than a finished production that can be circulated around the world. Once it exists, it can...preserve the thoughts, feelings, and aspirations of a people."

The journal devotes a lot of space to the success stories of indigenous producers such as Torrie. The simple recollections of such producers is the most important contribution of Indigenous peoples, bridging the digital divide.