Coral fish, found in the waters of Southeast Asia, are falling prey to the greed of restaurateurs 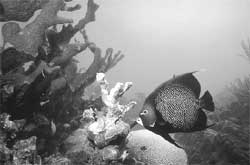 it is a fight for survival for Southeast Asia's coral fish like groupers and wrasses. With plenty of people more than willing to pay a handsome price for these fish, Chinese restaurants are encouraging fishing to the point of endangering marine life. The World Wide Fund for Nature (wwf) in a statement issued recently has voiced concern over this practice.

Quoting Traffic South-East Asia, a report produced by the wildlife monitoring arm of the wwf and The World Conservation Fund, revealed that reef fish are quickly disappearing from Southeast Asian waters. Reefs off the shores of Indonesia, the Philippines and Malaysia are the most affected, the wwf added. The report also said that the use of dynamite to catch fish has considerably damaged reef ecosystems, which are important feeding and breeding grounds for commercial fishing. The procedure is barbaric as an explosion ruptures the air bladders that control buoyancy in fish making it easier to harvest the injured ones that float on the water's surface.

In Japan, boys and young men practice what is called the muro-ami fishing technique. Using rocks tied to the "scarelines" that are flagged with brightly-coloured streamers, they swim together over the reef and pound on its ridges. This scares the fish living inside the reef crevices and as they come out of the streamers lead them into a semi-circular net known as muro-ami.

The report chronicled a rising boom in exports during the early 1990s, only to be followed by plummeting fish stocks. Exports from Southeast Asia rose from 400 tonnes in 1989 to over 5,000 tonnes in 1995, but this figure declined by 22 per cent the following year. "Sustainable fishery could conserve fish stocks and provide income for coastal communities in South-East Asia. However, it has to be based on harvesting of relatively low quantities of high-value species," it added.