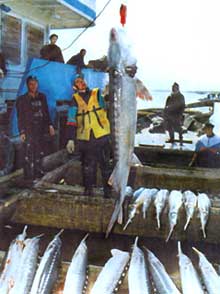 Azerbaijan's fisherfolk are defying a government ban on fishing for sturgeon, the country's national fish, whose caviar is in high demand across the world with an annual retail value of us $383-574 million. The Azerbaijan government introduced the ban after the Secretariat of the Convention on International Trade in Endangered Species of Wild Fauna and Flora (cites) refused, earlier this year, to grant any export quotas for sturgeon or sturgeon products from the four post-Soviet countries bordering the Caspian sea, including Azerbaijan. cites contends that export ban was necessary to check illegal caviar trade. Historically, 90 per cent of the world's caviar has come from the Caspian sea and its tributary rivers.

But increasing pollution, poaching and over-fishing have devastated the sturgeon population.