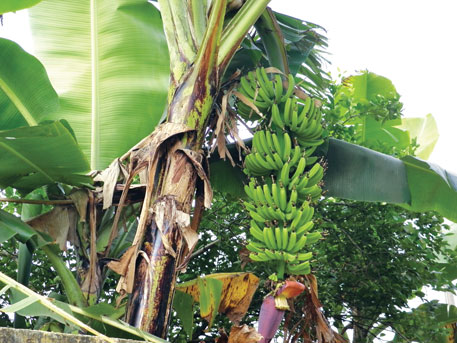 BANANA yield the world over is severely hampered by a burrowing nematode pathogen, Radopholus similis, which penetrates the root and topples the plant. One of the major banana cultivars, Grade Naine (GN), is highly susceptible to nematode infection but the Yangambi km5 (Ykm5) variety is resistant. A study published in Proceedings of the National Academy of Sciences on January 7, 2014, indicates which phytoalexins are behind Ykm5’s resistance to nematodes.

Phytoalexins are phenolic compounds responsible for resistance of banana to nematodes. Researchers extracted nine phytoalexins from both the cultivars of banana, GN and Ykm5, and found that phytoalexins (2S,3R)-2,3-Dihydro-2,3- dihydroxy-9 phenylphenalen-1-one, isoanigorufone, and anigorootin present exclusively in Ykm5. Methylirenolone was found only in GN. Compared to GN, twice as much anigorufone was found in Ykm5.

Using modern imaging techniques, spectroscopic analysis and bioassays, the researchers also found that plants accumulated phenylphenalenones (a kind of phytoalexins) specifically in the infected root tissues of both resistant and susceptible varieties. “Pathogen resistance is not due to lone production of phenolic compound, rather it is because of its variant concentrations in specific root regions that are highly susceptible to nematode attack,” said Dirk Holscher, lead author of the study. The preliminary findings indicate that of all the compounds screened, lipid soluble anigorufone is the one which is highly toxic to the pest. Inside the infected root tissues, anigorufone accumulates as lipid droplets and causes a metabolic dysfunction in the nematode. “This is the first study wherein researchers were able to dissect a part of the resistance mechanism in Ykm5 variety,” says Dirk De Waele from the department of biosystems, University of Leuven, Belgium.

“We believe that such studies will provide substantial evidence for the development of recombinant banana varieties which are nematode resistant. It would also help reduce the pesticide load in banana plantations that poses serious threat to both humans and the environment,”Ã”Ã‡ÃªsaysÃ”Ã‡ÃªRonyÃ”Ã‡ÃªSwennen, professor at the University of Leuven, Belgium, who led the research team.