Increasing use of biotechnology 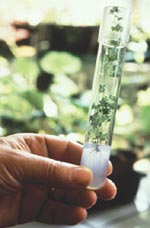 across the world, biotechnology's reach has increased by 12 per cent in 2002, with the land under transgenic crops amounting to 58.7 million hectares. So states a report of the International Service for the Acquisition of Agri-biotech Applications (isaaa), a non-profit organisation with regional centres across the world.

From 1996 to 2002, global area under transgenic crops has increased 35-fold -- from 1.7 million hectares to 58.7 million hectares. This ranks as one of the highest adoption rates for crop technologies. "This reflects farmers' need for technology," says Clive James, chairperson of isaaa. In China, farmers growing Bt cotton increased their income by us $200 per 0.40 hectare (us $750 million nationally).

The report projects that by 2005, the global market value of biotech crops is expected to be us $5 billion as compared to us $4.25 billion in 2002.