India, Bangladesh to save Sunderbans 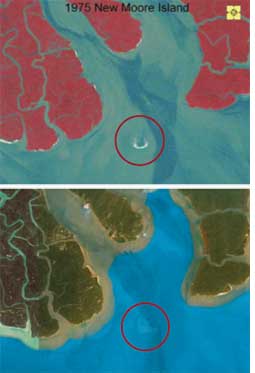 New delhi and Dhaka have joined hands to protect the Sunderbans, the world’s largest mangrove forests spread across West Bengal in India and Bangladesh.

Environment ministers of the two countries met at a climate change workshop in Kolkata on April 4 and announced that a Sunderbans ecosystem forum would be in place by September. The forum would exchange information and undertake joint projects like tiger census and mangrove conservation. Jairam Ramesh said the entire Sundarbans is one ecosystem and “we need to share experiences and working plans for conservation.”

Bangladesh’s environment minister, Hasan Mahmud, said there is an urgent need to protect the islands from global warming induced sea level rise. A recent assessment of threats to the Sunderbans, by the Wildlife Trust of Bangladesh in association with the Zoological Society of London and other institutes identified 24 threats to the ecosystem. Of these, six need immediate attention.

The most recent impact of climate change and consequent sea level rise on the Sunderbans is the disappearance of New Moore or Purbasha island, a tiny uninhabited island in the Bay of Bengal. The island is known as South Talpatti in Bangladesh. Both countries claimed it was their’s after an American satellite discovered the island in 1974. “After studying satellite images recently, we could confirm that New Moore island has been washed away and rising sea level seems to be the predominant cause,” said Sugata Hazra, professor at the School of Oceanographic Studies in Jadavpur University in Kolkata. Commenting on the development, Mahmud said, “We never wanted global warming to settle a bilateral dispute by drowning an island but the fact remains that it got drowned.”

Hazra said the sea has claimed 210 sq km land in the natural world heritage site, spread over 10,000 sq km. The sea level has been rising at the rate of over six mm per year in some areas as against 3.12 mm before 2000, the professor said.