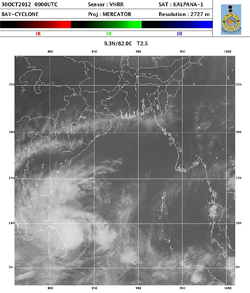 The deep depression at about 500 km south-southeast of Chennai in the Bay of Bengal has intensified into a cyclone. The cyclone, which has been named Nilam, is expected to cross Nagapattinam in north Tamil Nadu and Nellore in south Andhra Pradesh by October 31 evening. Following this, the India Meteorological Department (IMD) has issued an alert for the coastal districts.

M Mohapatra, senior scientist at IMD, in a press briefing at New Delhi said that there is 60-79 per cent probability of the storm striking the Chennai-Nellore belt along the east Indian Coast. “Very heavy rainfall, up to 25cm, is expected over the next 24 hours. The cyclonic storm, which comes in quick succession of Hurricane Sandy, will generate stormy sea waves up to 1 metre,” he added.

As a precaution, control rooms and help lines have been opened. Officials have been asked to prepare for evacuation from coastal villages. Cyclone shelters along the coast are being readied. Fishers along north Tamil Nadu, Puducherry and Andhra Pradesh coasts have been advised not to venture into the sea.

“We’re expecting wind with a maximum speed of 100 kilometre per hour,” says Sanjay Gupta, special secretary, Andhra Pradesh Planning Department, who is coordinating the cyclone disaster management. Nellore and Prakasam districts are expected to have major impact of the cyclone, he adds. In Krishna, which is a high cyclone-prone district, the administration has opened control rooms in coastal areas and has conducted an awareness campaign asking fishers to stay away from the sea. In Singarayakonda area in Prakasam district, high tides were witnessed this morning causing alarm. However, no damage has been reported so far.

“Though it’s raining in some pockets of the coastal region in Andhra Pradesh, it’s not heavy for the time being,” says Gupta. In Nellore and Prakasam there are chances of heavy rains.

Chennai is witnessing rains and there are forecasts of more heavy rains. Schools and colleges have been shutdown in Chennai, Nagapattinam, Cuddalore, Kanchepuram districts and Puducherry. According to D Karthikeyan, Chennai Corporation Commissioner, all field officials have been asked to stay in their offices at night; 280 corporation schools and four community kitchens are being readied to be used as temporary relief centres.

With inputs from Dinsa Sachan