India gets near bottom rank in Nuclear Materials Safety Index

Among the nuclear-armed countries, India has been placed just ahead of Iran and North Korea in terms of securing safety of nuclear materials. According to the Nuclear Materials Security Index (NMSI), a set of data published by US-based non profit, Nuclear Threat Initiative (NTI), although India's position has improved since 2012 in terms of keeping its nuclear materials safe, it continues to hold 23rd position among 25 countries with weapons-usable nuclear materials.

NTI's latest assessment, which was released earlier this week on Tuesday, shows that the world has about 2,000 tonnes of weapons-usable nuclear  materials, spread across hundreds of sites around the globe. “Today, the approximately 1,400 metric tonnes of highly enriched uranium (HEU) and almost 500 tonnes of separated plutonium that make up global stocks of weapons-usable nuclear materials (both the civilian and the non-civilian  or military), which are the key ingredients for a nuclear weapon, are stored at hundreds of sites in 25 countries,” the report states. 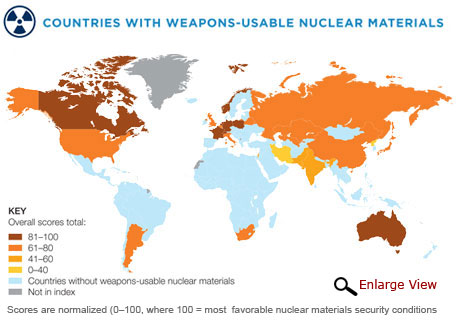 It further adds that guidelines for nuclear security by global nuclear regulator, International Atomic Energy Agency (IAEA), are understood by many states as obligations. As a result, “the legal agreements and  the guidelines cover only 15 per cent of weapons-usable nuclear materials: those used in civilian programs. The remaining 85 per cent of materials are categorized as military or non-civilian and are not subject even to those limited practices,” the report states

Although, India's score (41 out of 100) improved since the first NMSI was released in 2012, it lags behind its nuclear-armed neighbours, China and Pakistan. India scored additional points for contributing to IAEA Nuclear Security fund and adopting United Nations Security Council Resolution 1540 which regulates nuclear proliferation. 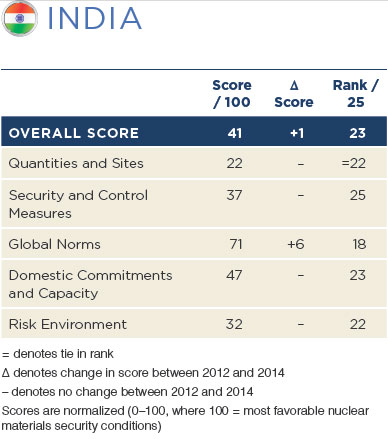 However, NTI states that India's overall score just improved by one point in the index because India's regulatory structure lacks key requirements for securing materials. “India’s regulatory structure is missing key provisions on security; in some cases, security measures are recommended but not required. Weaknesses are particularly apparent in the areas of transport security, material control and accounting, and measures to protect against the insider threat, such as personnel vetting and mandatory reporting of suspicious behaviour,” the report states.

It further notes India pledged to establish an independent regulatory agency for nuclear security, but the legislation aimed at doing so has been stalled. Further, the report indicates that as opposed to the global trend of reducing weapons-grade nuclear material in the last four years, India is among the four countries which have increased nuclear materials. The other three are the United Kingdom, Japan and Pakistan. While the UK and Japan increased nuclear materials for civilian purpose, Pakistan and India have increased it in both civilian and military use.