While the EU said it did not want a detailed discussion on pre-2020 actions, India pushed for a draft "negotiating text" 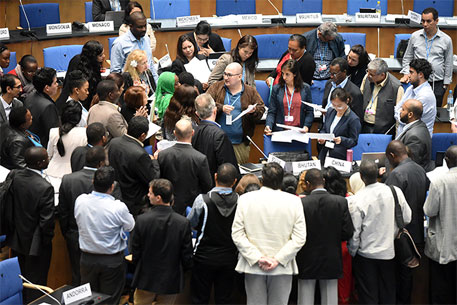 The negotiations on climate change action between now and 2020 took an interesting turn last week when at least two clear proposals emerged—one from the EU and the other from the G77 and China, the group that represents the concerns of most of the developing world.

The G77, which includes India, is pushing hard for a comprehensive pre-2020 agreement which would not be restricted to identification of mitigation actions by the UNFCCC technical examination process and conducting of “high-level” ministerial dialogues.

Speaking on behalf of the G77+China, Mali gave details of the sections which would be included in its draft pre-2020 proposal:

The European Union was clearly opposed to a pre-2020 agreement that was as comprehensive as the one outlined by the G77 nations. In its own submission, the EU spoke of strengthening the existing technical examination process and meetings (TEMs) and having "high-level” ministerial dialogues.

It also said that having a summary for policy makers could serve as an effective link between the technical inputs made through the TEMs and the political decisions and processes. It is also keen to include participation of non-state actors—the private and civil sectors.

In a major blow to expectations of enhanced pre-2020 action from developed countries, the EU categorically stated that it will not revisit any targets for the pre-2020 period. This comes at a time when we have understood from different scientific assessments that we need a 40-per cent reduction in emissions below 1990 levels to keep global warming under 2°C. With the current emissions targets, however, the world is likely to achieve only an 18-per cent reduction over 1990 levels.

The EU also said that it would not want to start line-by-line negotiations on the pre-2020 draft text, claiming that such a process would be too arduous and long-drawn-out.

India retorted and pushed for all submissions of parties on the pre-2020 work plan to be compiled into a draft "negotiating text", similar to the Geneva text that focused on post-2020 commitments. India also pointed out that since there were only a few issues to focus on in the pre-2020 period, it would lead to only an eight-to-10-page draft text and, hence, would not necessarily be an “arduous and long-drawn-out” process.