India might agree to discuss HFCs under Montreal Protocol 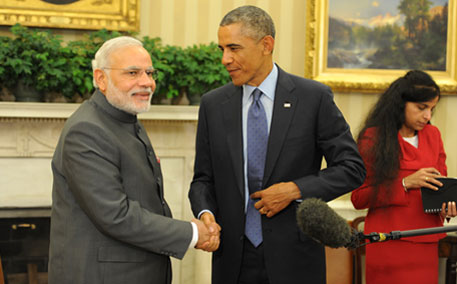 India and US have embarked on a “new and enhanced strategic partnership on energy security, clean energy and climate change”, said a joined statement issued by the two countries during Prime Minister Narendra Modi’s recent visit to the country.

The two sides also signed a Memorandum of Understanding (MOU) on clean energy according to which the US will provide up to US $1 billion as loan to help India shift to renewables. But in a series of negotiations before reaching the deal, US tried to link the energy pact with hydrofluorocarbons (HFCs) – a coolant that causes global warming – so that India agrees to discuss HFCs under the Montreal Protocol. The international treaty regulates substances that deplete the ozone layer like aerosols, refrigerants and solvents.

The environment ministry expressed its reservations over the US negotiating team leveraging the clean energy pact and trying to bypass it in decision making. Such a deal was initially rejected by Environment Minister Prakash Javadekar and it appeared that the deal was stalled. However, after intense back channel negotiations leading to the joint statement, it seems that the logjam over HFCs may soon be lifted and India might agree to form a “contact group” at the meeting of parties to the Montreal Protocol in November this year. Such a move will be a departure from India’s earlier stated stand which insisted on discussing it under the UN Framework Convention on Climate Change (UNFCCC). HFCs and other greenhouse gases are already covered under the UNFCCC.

The joint statement seeks to recognise “the need to use the institutions and expertise of the Montreal Protocol to reduce consumption and production of HFCs, while continuing to report and account for the quantities reduced under the UNFCCC”.

It also acknowledges the formation of a task force to discuss safety costs and issues related to access to alternate technologies that are set to replace HFCs.

India has been blocking efforts to set up a “contact group” under the Montreal Protocol that will discuss how HFCs can be tackled. This is because alternative technologies that will replace HFCs are expensive and the proprietary rights to these alternatives lie with US multinationals which hold patents to hydrofluoroolefins (HFOs) and are pushing them as a replacement to HFCs.

This joint communiqué gives the Indian government and industry an opportunity to explore their financial, technological and policy options for climate change mitigation and benefits from energy efficiency improvements.

Though HFCs were introduced as ozone-friendly gases, they are greenhouse gases with high global warming potential. The US and several other developed countries have long been pushing to replace HFCs with alternative technologies, such as HFOs, and want the matter to be discussed under the Montreal Protocol.