India now has a climate programme 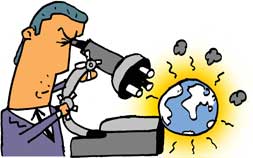 THE central government has launched a programme to create indigenous knowledge base on climate change and environment. Union minister for environment, Jairam Ramesh, announced on October 18 that the Indian Network of Climate Change Assessment (incca) would build a research base on global warming and its impact on communities and their economy.

Scientists studying climate change will get networked under incca to study black carbon, the impact of climate change on Himalayan glaciers and rainfall patterns among other things. The programme will also cover every major sector of economy like water resources, agriculture and natural ecosystems.

A N ational Institute for Climate and Environmental Science would be established in collaboration with the Indian Space Research Organization (isro) under the programme. The Institute will build its own monitoring, measuring and modelling capabilities in partnership with 127 research institutes across the country, Ramesh said.

The research institute, to be commissioned by the end of the year, will have 100 scientists dedicated to research on climate change impact; 40 scientists at isro working on climate and environment would supervize them. isro is also planning to launch two satellites dedicated to study of atmospheric aerosols next year, said isro chief, G Madhavan Nair.