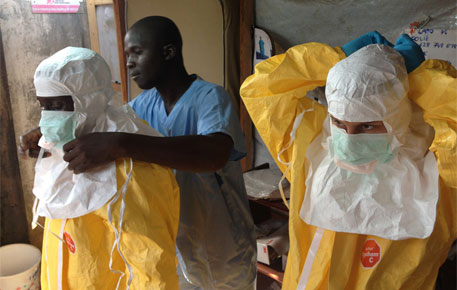 Though the present outbreak of Ebola is restricted to West Africa, many other countries across the world are quite “vulnerable” to it.

A latest report, released by international non-profit Save the Children, has ranked the world’s poorest countries on the state of their public health systems. It has stated that 28 countries have weaker defences in place than Sierra Leone where, alongside Liberia and Guinea, the current Ebola crisis has already claimed more than 9,500 lives.

Titled “A Wake Up Call: Lessons from Ebola for the World’s Health Systems”, the report also mentions that while the current Ebola outbreak has cost the three affected countries a total of US $4.3 billion, strengthening the health systems of those countries in the first place would have cost just US $1.58 billion.

The report has listed 28 countries as the ones with health systems as fragile as, or weaker than, Liberia’s. While Somalia ranks lowest in the rankings, it is preceded by Chad, Nigeria, Afghanistan, Haiti, Ethiopia, Central Africa Republic (CAR), Guinea, Niger, and then Mali. India also features in the list.

“Health systems throughout the developing world need to be strengthened to prevent another Ebola-style outbreak, or worse,” adds the non-profit.

“A robust health system could have helped get Ebola under control much sooner, saving thousands of children’s lives and billions of dollars,” says Carolyn Miles, president and CEO of Save the Children USA.

The present outbreak of the disease has claimed nearly 10,000 people and affected about 23,000 in the West African region, according to World Health Organization (WHO).

Talking about the shortage of healthcare professionals, the report goes on to say that according to the most recent data compiled before the Ebola outbreak, Guinea had only one health worker per 1,597 people, Liberia one for every 3,472 people and Sierra Leone one per 5,319 people. Low salary for such professionals has been cited as one of the reasons behind the shockingly less number of healthcare workers.

Like many other experts in the past, the latest report has also held insufficient efforts by the international agencies responsible for such an outbreak. “WHO did not declare an international public health emergency until August 2014—long after Médecins sans Frontières (MSF) had begun warning that this Ebola outbreak was very different from the previous rural outbreaks,” says the report.
Web edition Web edition News News News WEST AFRICA vulnerable countries Sierra Leone Save the Children non profit ebola Down to earth A Wake Up Call: …
SUPPORT US