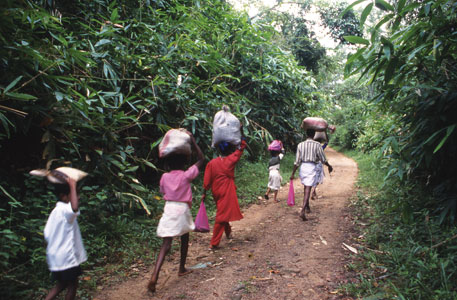 The Indian government is finally making official the mechanism for reducing emissions from deforestation and forest degradation, popularly known as REDD+. On April 28, the Union Ministry of Environment and Forests (MoEF) has made public its draft policy to implement the mechanism that aims to provide monetary incentives to forest communities for protecting forests, which are major carbon sinks.

The move comes five months after the developed and developing countries agreed on a framework to implement REDD+ during the United Nations 19th Conference of Parties on climate change in Warsaw in November last year. During the conference the countries agreed upon seven ways through which developing countries can be compensated for their efforts to protect and increase forest cover on the basis of their carbon sequestration value by the rich nations.

One step forward, two steps back.

India has 69.20 million ha (21.05 per cent of its total geographical area) under forest cover. It ranks 10th in the world in terms of forest area as per the Global Forest Resource Assessment (GFRA), 2010. REDD was proposed as a mechanism to discourage deforestation and degradation of forests to reduce carbon emissions around eight years ago. Since then India has been hoping to tap the global funds for protecting and increasing the forest cover. For years it has been working on REDD+ preparedness to build an infrastructure to implement REDD+ programmes.

Among other things, the draft REDD+ policy aims “to create REDD+ architecture at National and Sub-National levels, to encourage and incentivise local communities for their role in conservation by transferring the financial benefits accrued on account of REDD+. ” It also aims to “safeguard the rights and interests of local communities including improvement of their livelihood.” It proposes to develop institutional framework and provide clear role and responsibilities for various players and stakeholders.

National REDD+ Authority proposed
As per the policy, a National REDD+ Authority will be established in MoEF under a national steering committee on REDD+. The authority will prepare a national inventory of carbon sequestration in forests, an action plan indicating the national reference level for emissions and a national monitoring and reporting system. It will also support creation of sub-national level REDD+  architecture/institutional framework with relevant stakeholders and initiating REDD+ pilot projects for learning. A newly created REDD+ cell and the government, semi-government and non-government technical and scientific institutions such as Forest Survey of India, Indian Council of Forestry Research and Education, Indian Institute of Forest Management, Indian Institute of Science and Wildlife Institute of India will assist the national REDD+ authority.

The policy also aims at developing a mechanism for the fund flow to the communities and to put in placer safeguards against the leakages of funds and for protecting rights and livelihoods of communities. It aims to achieve the REDD+ readiness in next three years. The ministry has invited suggestions and comments from the stakeholders on the draft policy.