AmBisome injection to be provided free, incentive to ASHA workers and patients 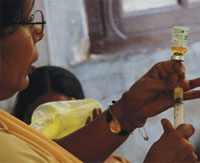 The Union health ministry on Wednesday announced that kala-azar or black fever will be completely eradicated from India by 2015.

Union health minister Harsh Vardhan, who was on a visit to Patna  on Tuesday, announced that AmBisome (amphotericin B) injection, with an efficacy rate of 98 per cent, will be provided free of cost to kala-azar patients.

Bihar accounts for 80 per cent cases

He also pointed out that Bihar alone reports nearly 80 per cent of black fever cases. An Ambisome injection that is priced around US $18 would be provided free of cost by World Health Organization (WHO).

“Our aim is to eradicate black fever completely from country by 2015,” Harsh Vardhan said. He stressed that not only doctors but also field level ASHA workers would be given an incentive of Rs 300 for reporting a black fever case and an additional amount of Rs 100 for garnering community support for spraying chemicals to get rid of sand flies. 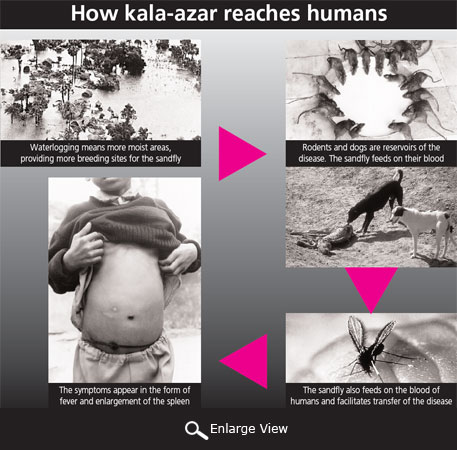 Apart from the health worker, each black fever patient would be also entitled to Rs 500 per day. This step has been taken to motivate patients to undergo complete treatment. Black fever is a contagious disease and spreads at an alarmingly high rate.

Government has also decided to substitute DDT spraying with synthetic pyrethroid to eradicate sand flies. Sand flies spread the disease with their bite. Experts say that DDT spraying was not effective in some districts of Bihar in controlling sand flies.

C P Thakur, an expert on black fever and also a senior BJP leader, pointed out that elimination of the disease is a challenge. “One of the biggest challenges is uninterrupted supply of AmBisome injections,” he said.

Apart from medical supplies, post-kala-azar dermal leishmaniasis (a complication of kala-azar or visceral leishmaniasis) remains a tough challenge. The treatment protocol followed earlier involved 12 weeks of miltefosine. The dosage of the new drug, AmBisome,  will be of only three weeks duration.

The new diagnostic kit requires urine or oral fluid or spit that is collected in a tube and mixed with a solution.

The new testing kit has drastically reduced cost of detecting black fever, from Rs 500 to just Rs 65. RMRI director Pradeep Das, during the launch ceremony of new testing kit, announced that the vaccine to prevent kala-azar would be ready in the next four years.