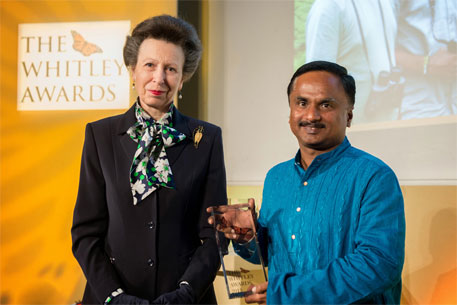 Indian conservationist Ananda Kumar is a happy man these days. And he has every reason to be. For, Kumar has recently been awarded the Whitley Award, dubbed a “Green Oscar”, for creating an SMS-warning system to help tea and coffee plantation workers live safely among elephants.

Man-elephant conflict is a common phenomenon in Valparai plateau in Tamil Nadu’s Coimbatore district. Here, people live in perpetual fear of unexpected encounters with elephants in the dark.
With forests gradually giving way to agricultural fields and human habitations, man-elephant conflicts have risen across India. In many places, elephant corridors have been proposed to ensure the safe and free passage of tuskers from one forest to another. Every year, 400 people and more than 100 elephants die across India, according to news reports.

In many states like Jharkhand, West Bengal and Odisha, village residents resort to traditional methods to scare jumbos away. This includes lighting firecrackers and beating drums at night. However, in many cases these measures fail to act as elephants plunder homes and fields, often trampling unlucky victims.

Valparai, located in the Western Ghats, has numerous tea and coffee plantations. Beverage companies have transformed 22,000 hectares of prime rainforests for setting up their estates. Around 70,000 workers, who work in these plantations, live in an area surrounded on all sides by the forested Anamalai hills.

As dusk falls, these workers make their way back to colonies after a hard day’s work. But their journey is fraught with danger as there is a chance of encountering elephants on the way.
“They are scared. If I am there I am really scared,” Kumar was quoted by the media as saying. “It’s very difficult to make out elephants in the dark. It’s a huge animal and looks like a rock and will be standing very still when they notice people.”

About 2,000 elephants inhabit the Anamalai hills. Conflicts usually take place when every year these animals use the plantation route to reach other parts of the forest. 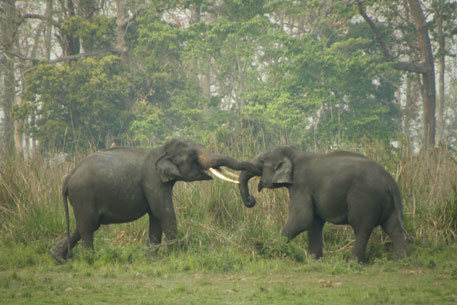 “Elephants are strongly related to their ranges, this is scientifically established. It’s a part of their home, which is lost to plantations because of historical exploitation,” Kumar added.
The conservationist has spent 10 years working on a system of text messages, TV alerts and warning lights to keep track of elephants during their movement.

According to Kumar, if elephants are startled or they feel threatened, they can be very dangerous. In Valparai, 41 people have been killed since 1994.

“Out of 41 deaths, 36 people did not know there were elephants. If these people had known about the elephants’ location, all these people would have been alive,” Kumar said.

But animals like the elephant occupy an important place in religion in India and people learn to live with elephants rather than drive them away. “There is a gentle perception of elephants,” Kumar said, as they are considered a manifestation of the Hindu god Ganesha.

In a decade, Kumar’s warning system has cut the rate of deaths arising out of man-elephant conflicts to just one from three per year. It is being considered a novel idea in reducing conflicts across India.

The conservationist has developed an Elephant Information Network (EIN) which acts as an early warning mechanism to alert people when the animals are nearby.

A team comprising trackers, known as the conflict response team, watches over the elephants. It is assisted by the Tamil Nadu forestry department workers and local informants. Information is relayed via a hotline, monitored by Kumar’s colleague. The hotline receives over 1,000 calls each year. Many of these calls provide information about elephant sightings.

When an elephant is spotted in a particular area, alerts are sent via text messages to all people who reside within a few kilometres. At 5pm every day, TV stations broadcast the locations of elephants. The warnings also reach volunteer wardens, who operate red-warning beacons that light up via text messages. This allows people to plan their trips accordingly.

“The local communities have adopted this. Government has responded positively. It is a collective effort that is actually making it a win-win situation, both for elephants and for people,” said Kumar.

Incidents of elephants damaging property have reduced by half, he added.

Kumar’s challenge was not removing dangerous elephants from their habitats, but making both tuskers as well as humans feel safe in their habitats.

This is only the start of an exciting journey for him. Kumar will now use the award money to explore how the Valparai model can be replicated elsewhere.