Greenpeace alleges the government is targeting the non-profit for its campaigns against proposed coal and power projects in central India. The non-profit is yet to receive a notice from the ministry 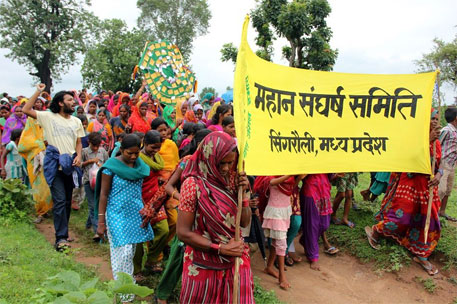 This past week, the Union Ministry of Home Affairs (MHA) reportedly suspended the licence of international non-profit Greenpeace’s India chapter.

According to news reports, a dossier prepared by MHA suggests that the NGO transferred Rs 53 crore to its accounts without informing the ministry, which the ministry termed as “prejudicial to public and economic interest of the country” and a violation of The Foreign Contribution and Regulation Act (FCRA), 2010.

Experts say that this suspension is not likely to withstand judicial scrutiny.

According to the suspension notice issued to Greenpeace India, during the inspection of its records between September 24 and 27, 2014, the ministry found violations of various sections of FCRA pertaining to financial transfers, changes in the organisational structure and employing foreign nationals to strategise campaigns in India. The ministry, in a notice published on its website on April 10, granted Greenpeace 30 days to make a representation before the government.

On June 13 last year too, the ministry had blocked the FCRA account of Greenpeace India. On July 17, Greenpeace gave a representation to the ministry, but the ministry could not furnish any document to support why it had blocked the account. As the government did not issue any orders to unblock its fixed deposit account, the NGO approached the court again. On January 19, 2015, Delhi High Court asked the Reserve Bank of India to release funds amounting to Rs 1.87 crore. The court asked the ministry to respond to the NGO's allegation that their funds had been arbitrarily blocked. “At least, you should say something. First you freeze the account then you investigate the case, which is very, very uncommon,” the court reportedly said.

The court also said that the action taken by the ministry had violated the fundamental rights enshrined in Article 14 and Article 19 of the Constitution. Justice Rajiv Shakder ordered that since there was no material on record to restrict Greenpeace from accessing its account with IDBI Bank in Chennai, the amount in the fixed deposit account can be unblocked and transferred to the NGO's account.

MHA’s injunctions on NGO funding is nothing new. Two years ago, on April 30, 2013, Indian Social Action Forum (INSAF), a network of more than 700 grass root organisations operating in various parts of India, had found itself in a similar situation. INSAF had filed a petition in the Delhi High Court following which, the court had quashed MHA’s order on September 19, 2013.

Supreme Court advocate Kabir Dixit, who represented INSAF before the Delhi High Court, says, “Prima facie, there appear to be similarities between the Greenpeace and the INSAF cases of suspension of FCRA registration. This is curious because Justice V K Jain's judgment quashing the order of suspension in INSAF case was very clear. It precisely described the procedures and safeguards prescribed in FCR law for such suspension and also detailed the exact manner of government's infraction of the same. Therefore, one would expect the authorities to adhere to the law in subsequent cases.”

According to Greenpeace India, it has not received any communication from the ministry yet. “We have just learnt it from news reports that after freezing our accounts, we will be asked to represent before the ministry,” the spokesperson said.

News reports have suggested various reasons based on the dossier prepared by MHA. Greenpeace alleges the government is specifically and deliberately trying to undo the work done by the organisation for safeguarding the nation’s ecology and people. The suspension has been imposed for the next six months.

Greenpeace has been organising campaigns against coal mining across various parts of central India, stating that ecological concerns have not been addressed by successive governments. The campaigns revealed large-scale violations of the Forest Rights Act, Environmental Protection Act, Water and Air Pollution Acts by various governments and private companies involved in coal mining in these areas.

For example, Greenpeace had been protesting against the diversion of forest areas in Singrauli in Madhya Pradesh to aluminium producer Hindalco and power producer Essar. Subsequently, the Mahan forest was not put up for auction.