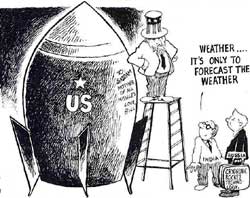 INDIAN Space Research Organisation (ISRO) officials are not unduly worried by the stalled transfer of cryogenic rocket technology from Russia to India. They believe alternative cryogenic engine technology, which uses supercooled gases to fuel rockets, can be developed indigenously if Russia gives in to US pressure and withholds the transfer of the technology to India.

The US, adamant that India signs the Missile Technology Control Regime, says proliferation of missile technology could lead it to be used for military purposes and also spark an arms race in the subcontinent. Russia was in a delicate position, trying to keep its commitment on the technology transfer to India and at the same time not antagonise the US.

At talks in Moscow in July, Russia offered ISRO officials the engine without the technology or to launch rockets for India at concessional rates in lieu of transferring the technology. But both options are unacceptable to India. Indian scientists say the impasse may actually throw up an opportunity to intensify indigenous rocket research, which, in their opinion, has been neglected in the past decade. ISRO scientists believe development of indigenous cryogenic engine technology would put the country's space programme on a firm footing.

However, ISRO administrators feel it is important to acquire the technology immediately in view of the Geostationary Launch Vehicle that is due for launch in 1995-96. They argue in-house efforts would delay the programme by at least seven years.

Efforts are also under way to convince sceptics of the justness of India's need. A fortnight before travelling to Moscow, ISRO chairperson U R Rao addressed the 36th session of the committee on the peaceful uses of space at the United Nations. He spoke on the uses of satellite technology in checking environmental degradation and urged developed countries to share this technology and not use it as a lever of power.

Rao also met American officials. During his talks with US vice president Al Gore, who is in charge of NASA, Rao waxed eloquent about India's peaceful intentions with the rocket technology and how it was being obtained mainly to facilitate efficient weather forecasting.