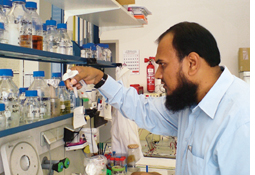 using a bug that is believed to have existed and evolved in human stomachs for millions of years, scientists have unearthed fresh evidence to support the hypothesis that Indians and Europeans had the same ancestors. Their finding lends support to the assumption of a possible gene flow into India with the arrival of the Indo-Aryans. It also bolsters the view that Neolithic practices and languages came to India from the Fertile Crescent, a historical crescent-shape region in the Middle East.

A team from the Centre for dna Fingerprinting and Diagnostics (cdfd) in Hyderabad along with French and Italian scientists analysed the gene pool of the Indian strains of the human gastric pathogen Helicobacter pylori and compared it with hundreds of isolates from geographic regions across the world. The results showed that the Indian H pylori bacteria belong to the sub-population hpEurope and, therefore, had a shared European ancestry.

"Further, we did not find any other sub-populations such as hpAfrica or hpEastAsian, in our survey of Indian strains, suggesting that the hpEurope type bacteria enjoyed a special survival advantage in Indian stomachs to out-compete any endogenous strains existing then," says Niyaz Ahmed, cdfd staff scientist who conceived the study.

The study, with Deccan College of Medical Sciences and Allied Hospitals, Hyderabad, University of Sassari, Italy, and Universit Victor Segalen, France, has been published in the early online edition of BMC Genomics.

Ahmed says the microbe possibly established itself in humans millions of years ago. It was recently recognised as a reliable biological marker of host-pathogen co-evolution and human migration. "It is very rare for a microbe to portray host evolution," he says.

The team gauged the gene pool diversity of the Indian isolates of H pylori from culturally and linguistically diverse populations. They analysed genetic features of the strains to trace ancestral origins and tried to reconstruct different waves of pre-historic Indian human migration. They also examined isolates from Santhal and Oraon tribes and found them similar to mainstream Indian strains from Hyderabad, Lucknow and Bengal.

The team reported that most H pylori strains from India shared significant homology with members of the sub-population hpEurope. "All isolates from north and south India clustered under hpEurope," says co-author S Manjulata Devi of cdfd.

The Indian peninsula has seen many waves of population migration. But there is scant archaeological evidence to understand peopling of this country. The Indus Valley and Harappan civilisations portray footprints of the Neolithic period suggesting the arrival of Indo-European speakers who later established the caste system, an anthropologically significant event. "The importance of the arrival of Indo-Aryans is undisputed, but it's not clear from genetic-geographic studies if they replaced endogenous people or whether existing people changed their cultures and languages, as argued by renowned human biologists like Chris Tyler-Smith," Ahmed says. "Such questions have never been addressed straight up. Using genome signatures from microbes that accompanied humans during their cultural transitions is perhaps an attractive way to do so."

The team tracked ancient origins of the Indian H pylori by substantiating the European link of the pathogen in India and then by proving that the major single virulence factor of the bacterium--the 'pathogenicity-island'--was also of European origin. For the first time, they sequenced the 'pathogenicity-island' of the Indian strain. The findings overlap with the idea of a possible gene flow into India with the arrival of Indo-Aryans. It suggests that H pylori might have arrived in India around the same time as the Indo-European (4,000 to 10,000 years ago).

"Present-day India represents a 'genetic playground' with diverse cultures and languages. However, the people are largely classified as tribes and non-tribes. Sequences from H pylori belonging to certain tribes were indistinguishable from those of the mainstream Indians and Europeans indicating sweeping spread of a single genotype across India," Ahmed points out.