Ancient civilisations were aware of prebiotics 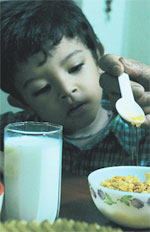 IT WAS not until mid-1900s that scientists woke up to the importance of prebiotics—a non-digestible food ingredients that helps nurture bacteria in human gut. Consequently, nutritionists started recommending foods like whole grains and pulses more often.

Now a study suggests that the secrets of nutrition related to prebiotics were well known to the ancient Indian civilisations and they consumed such foods. It is suggested that prebiotic foods helped in the co-evolution of the beneficial gut flora in the humans.

The bacteria digest carbohydrates and help fulfill 10 per cent of our energy requirements.

Researchers from the National Institute of Animal Nutrition and Physiology in Bengaluru reviewed the literature available about the diet of ancient Indian civilisations and compared it with the current understanding about prebiotics. The researchers looked at evidence from three periods–the Indus Valley Civilisation, the Vedic Civilisation and the Iron Age.

They found that the inhabitants were inadvertently cultivating and consuming prebiotics. The people in the Indus Valley Civilization grew wheat, barley, lentils and tubers. The team says these foods constitute the resistant starch portion of our food which is an important prebiotic. Resistant starch comprises complex carbohydrates which are broken down slowly, unlike simple carbohydrates that spike blood glucose.

Milk was an important component of the diet of the Vedic civilisation and also of populations that lived during the Iron Age (1200-272 BC). It is an important source of prebiotic compounds galacto-oligosaccharides.

They also found honey—a source for oligosaccharides—was consumed during the Vedic Civilisation (1500-500 BC). The study published in the July 10 issue of Current Science states that the Rigveda—one of the literary contributions of the civilization—talked about honey and noted that those who consume it “would become strong, rich, happy and wise”.

The team led by A K Samanta suggests that the people living during the time selected the foods to be grown after analysing their features like yield, taste and quality. Due to this, unlike European diets, Indian diets include several natural ingredients, especially a variety of grains, fruits and vegetables, which are “spontaneously dosing our body with native prebiotics to ensure proper gut health and functionality”.

“The study reiterates the point that whole foods are better than food taken in isolation, as in supplements,” says Shikha Sharma, consultant with Nutri Health,a wellness firm.