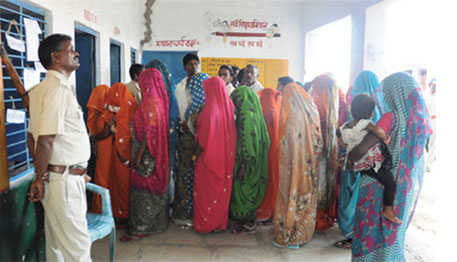 The latest Global Gender Gap report released on Tuesday by the World Economic Forum (WEF)  a Geneva-based non-profit, has placed India at 114th rank, 13 points below last year’s ranking and the lowest among BRICS countries. It is also one of the few countries where female labour force participation is shrinking.

Among the BRICS countries, the highest-placed nation is South Africa (18), supported by strong scores on political participation, followed by Brazil  at 71,  Russia (75), China (87) and India (114).

The report, the ninth in the series, captures gender-based disparities of 142 countries on economic, social, political, education and health-based criteria.

The rankings are designed to create greater awareness among a global audience of the challenges posed by gender gaps and the opportunities created by reducing them, says WEF. Based on the nine years of data available for the 111 countries that have been part of the report since its inception, the world has seen only a small improvement in equality for women in the workplace.

The report has placed India higher (rank 15) than the US (54) and the UK (33) on the parameter of political empowerment. WEF says this is because India has many women leaders in politics.

Iceland has topped the list of nations with least gender disparity for the sixth year running while Yemen remained last. One of the reasons for Iceland's success is its relatively small population while Yemen struggles due to high mortality rates and high rates of girls aged six to 14 not in school, says the report.

Last year’s leading four nations – Iceland (1), Finland (2), Norway (3) and Sweden (4) – are joined by Denmark, which has climbed from eighth place to fifth. Nordic nations dominate the Global Gender Gap Index in 2014; Nicaragua, Rwanda and the Philippines have also made it to the top 10.

“Much of the progress on gender equality over the last 10 years has come from more women entering politics and the workforce. While more women and more men have joined the workforce over the last decade, more women than men entered the labour force in 49 countries. And in the case of politics, globally, there are now 26 per cent more female parliamentarians and 50 per cent more female ministers than nine years ago,” says Saadia Zahidi, head of the Gender Parity Programme at WEF and lead author of the report.

“These are far-reaching changes – for economies and national cultures, however it is clear that much work still remains to be done, and that the pace of change must in some areas be accelerated,” Zahidi adds.

Countries from Europe and Central Asia occupy 12 of the top 20 positions in the index, one less than last year. Of the region’s major economies, Germany has climbed two places to 12th position, France has leapt from 45th to 16th, while the UK has fallen eight places to 26th. France’s gain is mostly due to increases in the number of women in politics, including 49 per cent women ministers – one of the highest ratios in the world, and narrowing wage gaps. The UK’s lower position can be mainly attributed to changes in income estimates, according to the report.

While, in Asia and the Pacific, the Philippines remains the region’s highest-ranked country, followed by New Zealand (13) and Australia (24).

Order of the Supreme Court of India regarding female foeticide, 16/09/2014