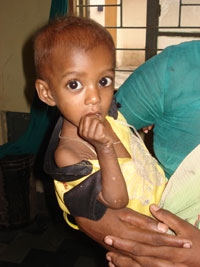 High economic growth has not helped India reduce its hunger level, says the new Global Hunger Index (GHI), released on October 11. What's more, the level of hunger now is the same as it was in 1996. The index, prepared by the International Food Policy Research Institute, has rated 120 countries. India has been ranked 65th, below Sri Lanka and Bangladesh. This is the seventh such report that has been tracking hunger across the world using multiple parameters.

“India has lagged behind in improving its GHI score despite strong economic growth,” says the report. Going by such rankings earlier, India's hunger level now is the same as it was in 1996. Between 1996 and 2001, there was a slight decrease in hunger level. But the latest score shows that in the past 10 years, the level has stagnated. “The stagnation in GHI score occurred during a period when India's gross national per capita income almost doubled, rising from about $1,460 to $2,850 (per annum),” the report analyses. Two-thirds of India's alarming GHI score is owing to the fact that 43.5 per cent of the country's children are underweight. In this parameter, India scores less than Ethiopia.

At the global level, hunger has reduced marginally in the past two decades. “Progress in reducing the proportion of hungry people in the world has been tragically slow,” observes the report. In 2012 the GHI fell by 26 per cent from the 1990 level. But there are severe regional imbalances in distribution of hunger. South Asia and the Sub-Saharan Africa have the highest levels of hunger. The 22 countries with “alarming” or “extremely alarming” levels of hunger are in these two regions. South Asia reduced its GHI score significantly during 1990 to 1996 but couldn't maintain the pace. Now, the sub-Saharan region's hunger level is lower than that of the South Asian region.

“As a result of economic and population growth, wealthier population in the developed and increasingly developing world are juxtaposed with nearly 1 billion food-insecure people and 2 billion people suffering from micro nutrient deficiency,” says the report on growing inequality.

The report comes at a time when food prices are set to touch the 2008-level that triggered food riots across the globe. Food prices went up by 40 per cent in 2007. The food price rise in 2007-08 pushed 130-155 million people into extreme poverty. A recent UN report suggests that this year food prices may reach the 2008 level, triggering panic. The insecurity has led to an unprecedented rush to grab land for future food production.

The GHI report shows that world's hunger hot spots are the preferred countries for securing lucrative land. “The majority of international land deals till date have occurred in those countries that experience higher levels of hunger and where the population and national incomes depend heavily on agriculture,” says the GHI report. Most of these land parcels were in use for sustenance farming by the world's poorest farmers in the most food insecure areas. Governments justify these deals to improve their fortunes by allowing industrial farming.

The state of food insecurity in the world 2012