India's Mangalyaan is halfway to Mars

Course correction procedure scheduled in April cancelled as the Mars orbiter is already on the right path, says ISRO 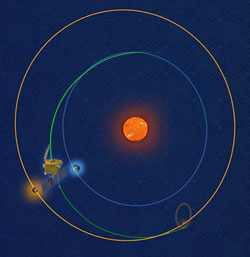 AT 9.50 am Wednesday, ISRO's Mars orbiter, Mangalyaan, completed half of its 680 million km journey. The orbiter has travelled a total of 337.5 million kilometres on an elliptic pathway. It is now 38 million km away from Earth.

“Mars orbiter spacecraft and its five scientific instruments are in good health. Periodic tests are being done on the different levels of autonomy built into the spacecraft for managing contingencies,” says ISRO in its press release. It now takes a total of two minutes and five seconds for a signal from Earth to reach the orbiter.

ISRO is continuously monitoring the orbiter using the 32-metre antenna stationed at its Deep Space Network in Byalalu village near Bengaluru. Karnataka. NASA's Jet Propulsion Laboratory is helping ISRO with the monitoring.

ISRO reveals that the course correction procedure scheduled in April has been cancelled as the orbiter is already on a correct path. The next course correction, if needed, would be in June. The orbiter is expected to be injected into Mars' orbit on September 24. With this, India will become the fourth country in the world to achieve the feat. It would be three days after NASA's Mars Atmosphere and Volatile Evolution (MAVEN), would enter the planet's orbit on September 21. This space probe, too, would study the planet's atmosphere while orbiting it.

The Mars Orbiter Mission is India’s first mission into deep space. The Mars Orbiter Spacecraft was launched on November 5, last year  and was catapulted into the heliosphere on December 1. Since then, it has been travelling without any mishap.