India will adhere to its no-first-use policy, says DRDO director 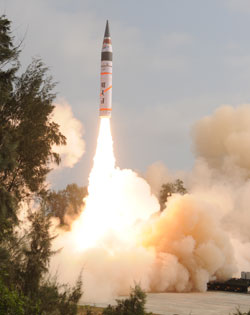 For India, a country obsessed with matching powers with China, the Agni V missile is a milestone. India’s latest ballistic achievement was test-fired off Wheelers Island in Odisha at 8:07 am on April 18. It was targeted into the Bay of Bengal. Missile experts have hailed the event, saying it has brought India closer to achieving deterrent parity with China. Agni V, which can target locations up to 5,000 km is an improvement over its predecessor, Agni IV, which was launched in November last year and covers a range of 3,500 km.

“Until now we were in the shadow of the Chinese because their missiles could outreach India. Agni V is going to match up to their ability. Every region of China is within reach of Agni V, says Bharat Karnad, security expert and professor at Centre for Policy Research, New Delhi.

Sudhir Mishra, director of missiles at Defence Research and Development Organisation (DRDO), Delhi, says, “We’re situated in a dangerous part of the world, and we’ve a population of one billion, which makes it imperative for us to develop technology of this magnitude.” He added that India’s goal with Agni V is only deterrent in nature, and the country adheres to its no-first-use policy. “It will only be used as a second attack if another country strikes first,” he says.

Yet to match China's ICBM power

But even with Agni V, India has not matched the powers of China which has missiles in the Intercontinental Ballistic Missile (ICBM) category. India has not tested an ICBM missile so far. P K Ghosh, missile expert and research fellow at Observer Research Foundation, Delhi, says an ICBM is supposed to cover a distance of at least 5,500 km, but Agni V falls just short of that at 5,000 km. “It was initially called Agni III-Prime, but  scientists added a little more range to it. It is essentially a modified version of Agni III,” he informs. Karnad says it really is an Intermediate Range Ballistic Missile. 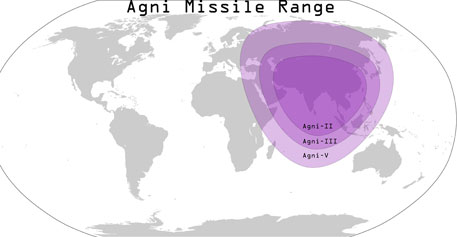 What makes it special

Agni V is completely indigenous, and boasts an improved navigation system. It is a surface-to-surface ballistic missile. A ballistic missile is one that follows a predetermined trajectory to reach a predetermined destination. If Agni V does not go according to its planned trajectory, it can be corrected to a limited scale by controls at the ground station, says Ajay Lele, research fellow at the Institute for Defence Studies and Analyses, New Delhi. It also has an improved navigation system, which helps improve accuracy of strike, adds Ghosh.

Other than the guidance system, Agni V consists of a payload, which is essentially a nuclear warhead or bomb "The most exciting thing about the missile is its capacity to carry multiple warheads,” says Ghosh. “It can carry three to ten warheads and hit multiple locations in one flight.”

“Agni V is essentially a nuclear missile. It combines distance with the ability to deliver heavy payload. Usually, you have either compromise on distance or weight of payload,” says Lele. It can carry payload of up to 1,000 kg. The missile itself is 17m long and weighs 50 tons.

DRDO ships located in midrange and at the target point constantly tracked the missile and confirmed the successful targeting of the missile at its destination. Further confirmations were made with the help of radars and satellites.

Agni V uses solid propellant, which is released in three stages during its journey (see 'The three phases of a ballistic missile's flight'). “Think of it like a rocket cracker used in Diwali, which has a solid propellant,” says Lele. Missiles can have both liquid and solid propellants. “This is so because this machinery is for wartime use, and liquid propellants require filling up, which takes about 48 hours. With solid propellant, you can quickly fire missiles,” explains Lele.