India's 'no' to GM food aid 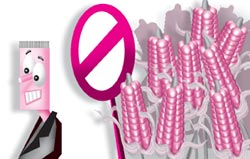 the Genetic Engineering Approval Committee (geac) categorically rejected for the second time in five months a request by two North-based aid agencies to allow the import of 23,000 tonnes of genetically modified (gm) corn-soya blend into India. Permission was denied because it was felt that the consignment could be contaminated with a particular transgenic corn variety which causes allergies.

A geac meeting on March 6 turned down the plea as the Indian subsidiaries of the two agencies -- care International and Catholic Relief Services (crs) -- failed to produce a certificate guaranteeing that the consignment did not contain StarLink corn, which the us has declared unfit for human consumption. "They were unable to satisfy our queries," an official said after presentations made by care, crs and the United States Agency for International Development (usaid) in New Delhi.

"It is the right decision," says Suman Sahai of Delhi-based non-governmental organisation Gene Campaign. But she feels that instead of taking up each case individually, the geac should have a uniform policy to address the issue of gm food imports. "What if they produce a certificate next time?" asks Devinder Sharma, New Delhi-based food and trade policy analyst. He wonders why the very idea of importing suspect food is entertained when 48 million tonnes of foodgrains are rotting in Indian godowns.

Funded by usaid under its food assistance project, the gm food was to be distributed as part of the Integrated Child Development Services programme. care and crs had applied for import clearance in July 2002, but geac had rejected their request in November.

StarLink, developed by Aventis sa, is a corn variety that has been genetically modified to contain an insecticidal protein derived from a naturally occurring bacterium (Bacillus thuringiensis or Bt). The us Environmental Protection Agency approved it only as animal feed in 1998, because this particular Bt protein does not break down easily and can prove allergenic.

StarLink hit the headlines in September 2000 when it was found to have entered the food chain in the us, sparking a massive withdrawal of corn products across the country. Early this year, some 1,200 tonnes of corn tested positive for traces of the StarLink variety in Japan.