Alternative rehab policy lost in a maze of committees 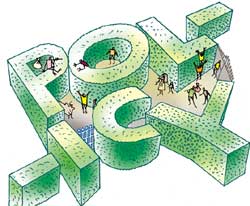 the government proposed and then disposed of their proposal, well almost. upa government's National Advisory Council (nac) had, in December 2005, provided an alternative to the controversial national policy on resettlement and rehabilitation for Project Affected Families, 2003, by way of a draft policy. Media reported on May 3, 2006 that the prime minister's office (pmo) had turned down the new draft policy calling it untenable in parts. At a meeting held in pmo on May 2, 2006, T K A Nair, principal secretary to the pmo, headed a secretaries' meet, which categorically rejected most of the radical clauses of the 2005 draft policy or put them in limbo by postponing discussions on them.

To obfuscate matters further, the draft was being discussed at several levels within the government at the same time. The draft initially went to the pmo and the Union ministry of rural development. The pmo further created a committee of secretaries and a group of ministers to review the draft policy. Meanwhile, the inter-sectoral committee on tribal affairs under the Planning Commission was also involved in the process of reviewing the draft.

The convoluted chain, however, does not end here. The inter-sectoral committee has further created a group of four to begin the task of formulating the draft's legislation and will present its comments by June-end.

The Union ministry of rural development, on the other hand, has remained silent so far, but is also expected to come out with a report by the month-end.


The new draft policy presented by the nac is poles apart -- in character, content and intent -- from the 2003 policy (see box: Miles ahead).The 2003 policy, notified in February 2004, came after a protracted two-decade long struggle within and outside the government (see box: History of errors). It has always been looked down upon as a super-diluted, pro-industry quick fix. Walter Fernandes, director of the North Eastern Social Research Centre, Guwahati, had then noted: "(The 2003 policy) will push thousands of families below the poverty line". Others had regarded is as eyewash (see 'Unsettling prospect', Down To Earth, March 31, 2004).

nac suggests the new law should be implemented with a retrospective of the last 10 years. It also asks for the cost of rehabilitation to be incorporated into developmental projects before assessing their economic feasibility. "If the actual costs are borne by project proponents they shall seriously apply their minds before deciding how much land they want. Presently, they ask for largesse," says Pradip Prabhu, one of the members of the inter-sectoral committee. Power sector giants, however, appear shaken. "We are opposed to the retrospective effect as well as the cost implication," says a senior executive in National Hydroelectric Power Corporation. Prabhu confirms that, saying, "The industry opposes it because it is worried about the cost implications."

nac admits that data on the total number of people displaced over 10 years does not exist and it would take some effort to compile it. But Fernandes's studies done in the mid-1990s estimate that about 21.3 million people were displaced between 1950 and 1990. He believes that the number may have increased to 30 million by now. Moreover, according to him, more than 75 per cent were never rehabilitated. Less than 25 per cent of the displaced have been resettled, some only partially. Development projects that led to displacement of people include dams (16.4 million people), mines (2.55 million people), industrial establishments (1.25 million people), and wildlife sanctuaries and parks (0.6 million people).

Forty per cent of the total displaced, according to Fernandes's studies, are tribals who constitute 7.8 per cent of India's population. It's these kinds of mind-numbing figures industry and government may have to deal with if the policy comes into force.

While the "retrospective clause" may be giving sleepless nights, other ideas too find opposition, even within the government. One of these is to define the zone of influence of a project. Policy framers want that those identified as 'project affected' should not be the only ones to be taken into consideration but also those in the peripheral areas who have suffered indirect loss of livelihoods and suffered economic consequences.

Renuka Vishwanathan, secretary, Union ministry of rural development, says, "While there are several points of discussion and some parallel processes going on, we (the ministry) shall come up with our report in a month's time on the draft policy." To expect efficacy out of such a report would be foolhardy. But considering the country has waited almost three decades for a reasonable rehabilitation policy, waiting for another 30 days does not seem to make much of a difference.
DTE Front Page Rehabilitation Rehabilitation Displacement Displacement Legislation GOI India News News News Delhi High Rise Building Fire control
SUPPORT US