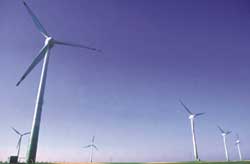 In this age of growing industrialisation, the focus is on renewable energy resources. According to Christopher Flavin, president of the World Watch Institute, "China and India are positioned to leapfrog industrial powers through investments in energy effi-ciency enhancing technologies and renewable energy sources". But how does this begin? Political will to support investments in renewable technologies and encouraging smart growth initiatives should help. Clearly, China appears to be ahead of us.

China's 11th five-year plan for 2006-2011 aims to build an energy-efficient society with increased investments in renewable energy sources. A new law has been passed in China making it mandatory for all buildings constructed after 2005 to be 65 per cent more energy efficient per square metre. This includes features such as water recycling, natural ventilation, and natural lighting. China also plans to convert existing buildings as per the energy-saving model by 2020.

In November 2005, a report from the Xinhua news agency said that Shanghai was launching a 100,000 rooftop solar photovoltaic (pv) system which would generate 430 million kilowatt hours of electricity -- enough to supply power to the entire city for two days. The scheme capitalises on the city's solar resources and ends up cutting 40,000 tonnes of carbon dioxide emissions and saving about 20,000 tonnes of coal needed for power generation. Delhi could also do well by integrating its solar pv systems into the grid system to offset the high demand-driven power cuts. Although this may require financial assistance from the government in terms of subsidies, it will be more paying over a period of time.

India, however, has had more success with wind energy. A report by Business Standard claims that India ranks fifth in the world in the global energy produced through wind generation after Germany, Spain, us and the Netherlands. Wind is a clean indigenous source with a potential for job creation. Its initial capital costs are only marginally higher than that of thermal plants (Rs 4-4.5 crore/ mw, compared to Rs 3.7 crore/ mw respectively). Current production of energy through wind is 3,000 mw annually but the potential is an astounding 45,000 mw a year. The problem is the lack of a national policy on renewable energy.

Experts say there needs to be more than just the occasional subsidy for capital investment. Wind energy is invested primarily by private sources and there needs to be a clear signal that their investments will see returns. Tamil Nadu and Rajasthan have managed to set up clear policies.

China has guaranteed all certified renewable energy producers in its service area that the grid will purchase their power and the price will be spread out to all the users across the grid. According to sources, such commitments can only spur further development in the renewable energy sector.

The potential in India is vast. It is the only country in the world with a ministry dedicated to alternative sources of energy. While winds of change may be in the offing, one only hopes that they blow in the right direction.